Part of BLU's 2019 lineup of introductory smartphones, the BLU C6 2019 delivers a set of pros and cons that's powered by an elementary 1.3GHz quad-core processor

and only 1GB of RAM

, consequently killing its chances of joining Phonerated's list of the fastest smartphones right off the bat. 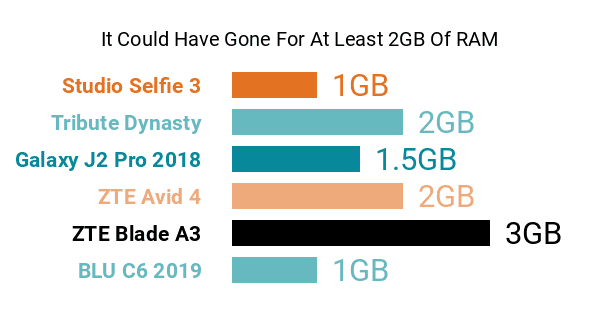 Extending its list of cons is the absence of 4G-LTE connectivity, which, as of this specs-based review, was considered all but a standard smartphone facet, even in the low-end category. Instead, the C6 2019 offers low-class 3G network compatibility.

Its screen comes in the form of a spacious 6-inch 18:9 facade

, although one that's marred by an underwhelming 1440 x 720 HD+ definition

-- see how it fares versus the best large-screen smartphones of its time here.

This addition to BLU's C-series is not without some pros, though, one of which is its 8-megapixel LED-flash selfie camera

-- a lot of similarly-priced phones settle for lower-resolution, flash-less front cams. At the back, it comes with an 8-megapixel rear-facing main camera accompanied by a typical LED flash and offering a maximum video-recording resolution of 1920 x 1080 (Full HD). Right under it sits a circular fingerprint scanner for phone and app security.

Joining its aforementioned CPU under the hood is a 16GB memory extendable by up to 64GB, while a 2800mAh battery

is on power duties -- we think the latter's raw capacity sounds more than decent, at least relative to its primitive processor. Like a good number of other BLU phones, it comes with two SIM card slots and it is offered in colors like Red and Gradient Blue (Twilight).

So, insofar as its technical pros and cons are concerned, the C6 2019 makes for a viable starter-class smartphone for budget-cautious users who prefer large displays.