The G9 is a middle-class unlocked BLU smartphone that features an assortment of pros and cons that's focused on stamina and screen space more than anything else.

Starting off with its weak points, this 2019 BLU model does not quite reach high-end territory when it comes to processing specs, relying on an eight-core Helio P22 processor that peaks at only 2GHz

as well as a 4GB RAM. In comparison, most of the best eight-core smartphones listed here on Phonerated as of this technical review bank on engines that peak at over 2.5GHz. Moreover, its 64GB native memory

sounds rather sober, although it can be augmented by the phone's 128GB microSD card slot.

Don't Buy The BLU G9 Before You Check:

Its pros include a wide 6.3-inch 19:9 curved-glass display

that introduces the brand's V-Notch infinity screen design concept (A respectable 13-megapixel selfie camera sits on its notch). Having said that, its mere 1520 x 720 HD+ resolution

easily wind up as cons to us, knowing that several of its large-screen competitors rock FHD/FHD+ (1080p) screens and score pixel densities of over 400ppi.

consisting of a standard 13-megapixel main cam and a 2-megapixel depth sensor, with a 52MP Super Zoom feature leading its imaging perks. This model also features BLU's 4-cell technology, which essentially compounds 4 pixels into a single sensor unit as a means of rendering crisp images. 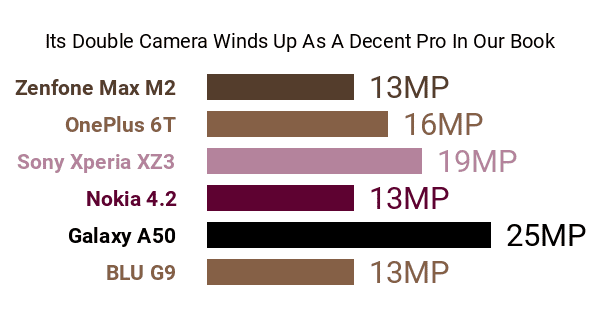 Also on board is a hearty 4000mAh battery

, a conventional (as of its release) rear-mounted fingerprint scanner coupled with an encrypted file management system, and standard 4G-LTE connectivity. Its pros and cons are topped off by a mirror metallic finish of either Black or Gradient Blue.

Wrapping up, BLU's G9 is a mid-level Android that sounds suitable for users who are most concerned about screen real estate and battery capacity.