Nothing more than a low-class smartphone for Android newbies and non-techies, the prepaid BLU View 1, which is carried by Net10 and Simple Mobile (as of this review of its pros and cons), suffers from a low-resolution 5.5-inch 960 x 480 (FWVGA) display

. At the very least, its screen has a wide 18:9 aspect ratio

that's reminiscent of those of some high-specked large-screen phones, whereas many of its competitors in the low-end Android market stick to the old-fashioned 16:9 solution. 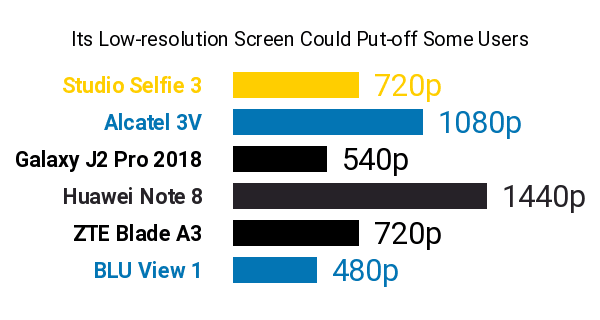 Don't Buy The BLU View 1 Before You Check:

This BLU phone does not have any bells and whistles whatsoever when it comes to photography, floundering in comparison to several other budget models found here on Phonerated with its 5-megapixel rear cam

-- Net10 also mentions that it has an 8-megapixel rear cam and a 5-megapixel one up front, but regardless of which camera duo it offers, it's still nothing worth calling home about.

Underneath this 4G phone's lid, it runs on a 1.5GHz quad-core 64-bit processor

, which we flagged a slight pro, knowing that most other models with tantamount specs settle for 1.3GHz-only quad-core chips. It also has a tolerable 2GB RAM and a 16GB memory

expandable by up to 64GB, the latter being twice as much as what many of its entry-level rivals offer. 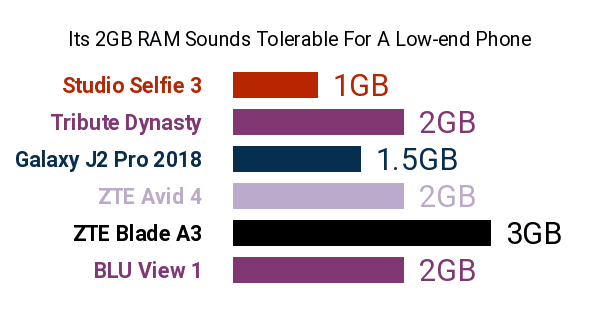 This low-end prepaid model feeds off a 2500mAh battery, which is neither a selling point nor that big of a con in our book, since Androids phones within its class usually offer somewhere between 2000mAh and 3000mAh of raw battery power.

The View 1 runs on the Android 9.0 operating system out of the box and, being coated in a classic Black finish that underscores its essentials-only feature set, it seems like a fitting choice for those of are new to the world of Android or those eying a cheap backup smartphone.