When it comes to pros and cons, the LG Tribute Royal is not exactly Android royalty, settling for rather mundane (by 2019 standards) specs, such as a 5.45-inch 1440 x 720 screen

and a 5-megapixel-only front camera

that(')s easily bullied by the selfie cams offered by some of the best selfie-driven smartphones in town. At the back, it has a so-so 8-megapixel rear-facing main camera accompanied by a single LED flash and standard autofocus.

Don't Buy The LG Tribute Royal Before You Check:

Additionally, it only supports up to 32GB of external memory

(It packs 16GB of on-board storage), which sounds extremely low compared to the 128GB or 256GB external storage ceilings boasted by a few other low-budget models found here on Phonerated.

This phone is not all about cons, though, as it comes with a 3000mAh battery pack

whose raw capacity is significantly higher than what many older entry-level smartphones offer -- usually somewhere around 2000-2500mAh only. That being said, its power cap is nowhere near those of the best big-battery smartphones available around the time of this data-driven review. Its battery scores up to 20 hours of continuous talk time.

Even though this budget-class prepaid smartphone will not likely find itself alongside some of the leading octa-core-powered models on the market, seeing that most of those models run on at least 2.5GHz chips, we still flagged its 2GHz octa-core MediaTek MT6762 engine

as a slight pro, if only because several competing models within this price group stick to ancient-sounding quad-core 1.3GHz processors. It is accompanied by 2GB of RAM, which we think sounds just right for a phone with its kind of feature set. 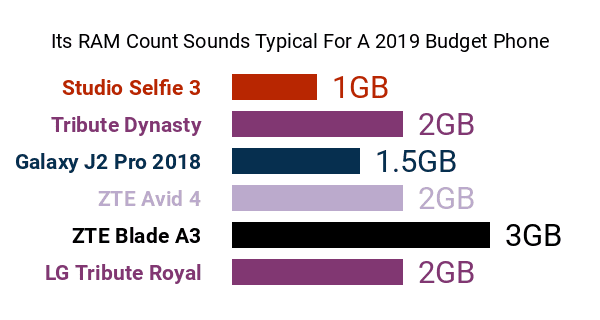 A couple more of its pros and cons include a 4G-LTE network adapter, an M3/T3 hearing aid rating, and the Android 9.0 Pie operating system.

All said, the Tribute Royal does not quite live up to its moniker, but its specs make it a viable choice for budget-cautious shoppers.

** This phone is also known as: LG Royal