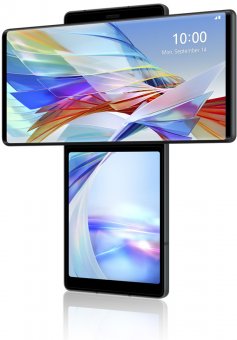 
A flagship-caliber phablet from LG, the Wing boasts a rather innovative dual-display setup

, which consists of a high-class 6.8-inch 20.5:9 POLED main display sitting on a hinge mechanism that basically allows it to swivel 90 degrees and reveal a secondary 3.9-inch GOLED screen. This T-shaped interface allows users to access two separate apps at once or enable an expanded gaming/multimedia control panel. Regrettably, though, its main screen only has a 2460 x 1080 (Full HD definition

, which shies of the 1440p (Ultra HD facades rocked by a few comparable models listed here on Phonerated.

Setting that con aside, however, its swiveling dual-screen setup still packs a punch, especially with the Snapdragon 765G eight-core 2.4GHz engine

and 8GB's worth of RAM

under the hood. Moreover, it comes with a similar 5G network adapter offered by the LG Velvet, another high-caliber 6.8-inch flagship released by LG in Q4 of 2020.

Heading over to its photography pros, the Wing rocks a triple-lens system

that's made up of a 64-megapixel primary sensor, a 13-megapixel ultra-wide cam, and a 12-megapixel gimbal motion camera tailored to action videography. For selfies, it offers a 32-megapixel cam with a motorized pop-up mechanism

, which was somewhat of a trend among upmarket Android phones around the time we were checking its specs out. By the way, feel free to discover some of the best selfie phones here. 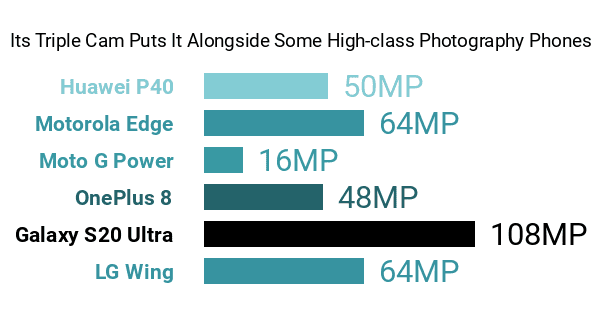 Don't Buy The LG Wing Before You Check:

, which we think could have been bumped up a bit, seeing that a number of similarly-priced large-screen phones pack at least 5000mAh of power in the tank. As for storage, the variant released in North America is loaded with 256GB of on-board memory, while, in comparison, the global version offers 128GB. Its list of pros and cons also includes a fingerprint scanner embedded right into the display and a MIL-STD-810G-certified housing

that basically means it is resistant to things like temperature extremes and vibrations.

Also joining the LG Wing's pros and cons are the Android 10 operating system and a finish of either Illusion Sky or Aurora Gray, topping it off as a viable choice for those who are heavily inclined to wards productivity, multimedia, and mobile gaming.