The Motorola One Fusion is a high-end smartphone that fuses together a high-resolution 48-megapixel main camera, an 8-megapixel sub-cam for wide-angle photographs, a 5-megapixel macro vision camera, and a 2-megapixel depth sensor for detailed portrait shots. The aforementioned quad-camera setup

, which is incidentally one of its biggest pros, brings to mind some of the best smartphones listed here on Phonerated -- multi-lens camera systems were all the rage as we were writing this specs-driven review. 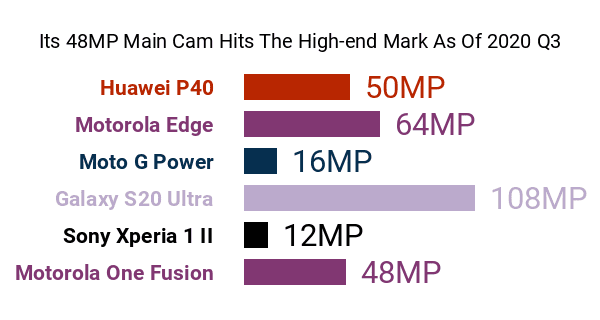 Don't Buy The Motorola One Fusion Before You Check:

That big facet aside, the One Fusion's fusion of pros and cons is not exactly flawless, and one of its biggest drawbacks is the 4GB RAM count

, which, when compared to the 8GB or higher RAMs boasted by a few other flagship smartphones, sounds rather underwhelming. That said, it does rely on the dual-cluster Snapdragon 710 processor

, whose 2.2GHz and 1.7GHz clusters sound just about right for a phone with its kind of features. Joining its hardware components is a 5000mAh battery

, which we consider more than decent, since a good number of comparable models settle for 4000mAh cells only.

Another slight con is the One Fusion's 720p-only screen resolution

(1600 x 720 pixels, to be exact) that obviously shies of the 1080p facades rocked by a few similarly-priced models from competing brands. Still, though, its 6.5-inch screen real estate and wide 20:9 aspect ratio

might appeal to those who love binge-watching shows or movies on the go or mobile gamers. Perched on its screen notch is a so-so 8-megapixel selfie camera

The rest of the Fusion's features include a fingerprint sensor for security, dual nano SIM card slots, and a 4G-LTE network adapter -- 4G is a must-have for any Android device, especially for ones released in the advent of 5G like this one.

With the Android 10 operating system and a finish of either Ocean Blue or Emerald Green tying its pros and cons together, the One Fusion winds up as a solid choice for those eying a phone that offers a respectable blend of photography and multimedia capabilities.