Somewhat a refined version of the 7T, the OnePlus 7T Pro is a flagship-class 8GB-RAM phone running on the Snapdragon 855 Plus engine

, which is a 7nm octa-core chip with an inbuilt AI engine. While it packs some big pros on the performance front, though, this 2019 flagship contender still has its fair share of cons. 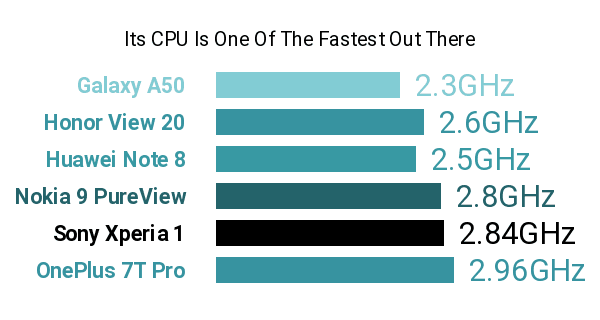 Don't Buy The OnePlus 7T Pro Before You Check:

It comes with 256GB of UFS 3.0 memory and it does not support storage expansion

, which sounds like a letdown, at least compared to some other high-end models that offer memory card slots on top of their large native storage memories. Additionally, although not many phones feature a motorized pop-up front camera, its 16-megapixel selfie cam suffers from a fixed focus capacity only

, instead of coming with standard autofocus.

On the flip side, the 7T Pro possibly plugs itself into Phonerated's list of the best photography smartphones on the market, touting a triple-lens camera

that's composed of a 48-megapixel primary 7P lens, an 8-megapixel telephoto lens for macro shooting and optical zooming, and a 16-megapixel wide-angle lens for landscape photography. Its imaging pros and cons are led by a 4K-2160p video-recording mode at 60fps, a 960fps HD-720p slow motion video mode, and the combination of optical and electronic image stabilization (OIS + EIS).

. It boasts a 90Hz refresh rate that's tailored to mobile gaming and it has a scratch-resistant 3D Gorilla Glass finish.

model is powered by a 4085mAh battery, which we think sounds just right, taking into account the power caps offered competing flagships that were released around the time of this specs-based review.

With the brand's signature Alert Slider and a Haze Blue coating topping off its list of pros and cons, the 7T Pro calls out to shoppers eying a performance- and photography-driven flagship phone.