The third iteration of ASUS's flagship gaming smartphone is a heavy-hitting 6.6-incher in the ASUS ROG Phone 3. Its biggest pro comes in the form of a Qualcomm Snapdragon 865 Plus 5G octa-core processor which clocks in at a staggering (by the standards as of this specs-based Phonerated review) 3.1GHz

, making it one of the fastest smartphones on the market, at least on paper. The forenamed engine also enables 5G network connectivity

and it is coupled with a gigantic 16GB LPDDR5 RAM

-- one of the highest RAM capacities in the mobile world when it hit the market. 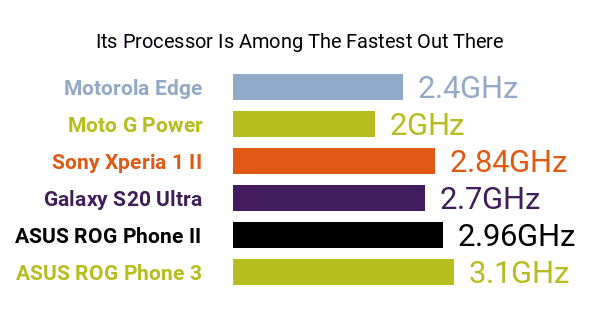 Don't Buy The ASUS ROG Phone 3 Before You Check:

placed alongside its edges, which may be assigned to trigger specific actions within certain games. It also comes with dual front-firing speakers and a quad-microphone setup promising to deliver premium-class audio experience when gaming.

While it has some solid hardware components, however, this ROG Phone is not without a couple of cons, one of which is the 1080p-only (2340 x 1080) definition

on its 6.6-inch AMOLED screen. In comparison, some of the best phablets in town boast 2K-1440p or sharper facades. Having said that, its screen nevertheless lands in high-end territory, boasting a 144Hz refresh rate

and a 1ms response time akin to those of many mainstream gaming monitors.

Going back to its hardware pros and cons, the ROG Phone 3 is loaded with a hefty 512GB UFS 3.1 on-board memory

, although the absence of a memory card slot

might be problematic for some users, especially those who lean heavily towards multimedia. As for power, it relies on a hearty 6000mAh battery

This edition of the ROG Phone also packs a punch when it comes to imaging, rocking a triple-lens rear camera

, which consists of a 64-megapixel primary lens for standard photography and 8K-4320p video-recording, a 13-megapixel sub-cam for wide-angle shooting, and a 5-megapixel macro cam for detail-intensive photography. Sitting up front is a 24-megapixel selfie camera, while a fingerprint scanner is embedded right into its display.

With the signature ROG UI (an overlay for its Android 10 operating system) and a Black Glare finish topping off its pros and cons, the ROG Phone 3 definitely caters to mobile gamers who tend to be quite meticulous when it comes to performance and user experience.