Asus Zenfone Max Plus (M2) Review of Pros And Cons


Somewhat a toned-down version of the Zenfone Max Shot, alongside which it entered the market, the Asus Zenfone Max Plus M2 suffers from a couple more cons than its sibling. For instance, it settles for only 3GB of RAM

and 32GB of native memory

, whereas the Max Shot has a 4GB RAM count and offers twice as much native storage -- this model still supports a whopping 2TB's worth of external storage

, though. By the way, check out some of the newest Asus phones here.

Don't Buy The Asus Zenfone Max Plus (M2) Before You Check:

Still on its hardware components, the Max Plus M2 is one of Asus's earliest models to run on the Qualcomm Snapdragon SiP 1 processor, which is the product of a collaboration between Qualcomm and USI that essentially integrates most performance pieces, such as the app processor and the modem, into a single semiconductor package, leaving more room for other components

like the camera or the battery. Specs-wise though, the aforementioned eight-core chip does not sound like that big of a pro compared to those of the market's leading eight-core smartphones, since it peaks at a sober 1.8GHz only

-- many of its competitors clock in at around 2.3GHz. 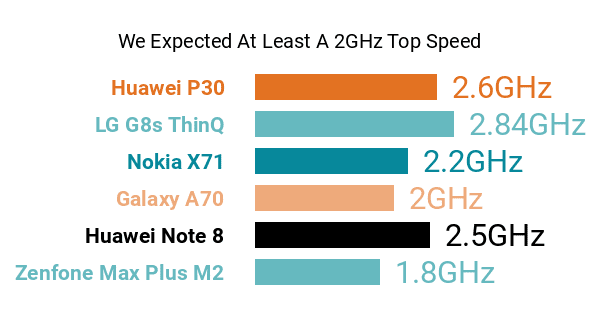 decked out with AI scene detection and a 6P lens. Note, though, that some of the best smartphones for imaging featured here on Phonerated throw more than two distinct lenses together -- its Max Shot sibling offers a three-lens setup. Up front, it offers a tolerable 8-megapixel selfie camera rigged with its own LED flash and automatic embellishment features.

For endurance, the Max Plus M2 banks on a 4000mAh battery

whose stress test scores, which are led by a 44-hour 3G talk time

, sound reassuring. As of this review, 4000mAh was somewhat the sweet spot for high-end smartphones. 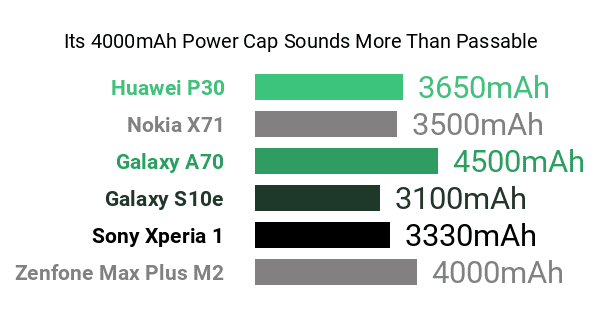 Topping off its list of pros and cons are a 6.26-inch 19:9 FHD+ (1080p) display and a standard rear-mounted fingerprint scanner. It runs on Android 8.0 Oreo out of the box and is offered in colors like Red and Silver.

In essence, the Zenfone Max Plus M2 makes for a viable choice for middle-class smartphone shoppers who value stamina and photography a lot more than performance.