Although it ends up as a middle-class smartphone in terms of overall pros and cons, the Asus Zenfone Max Shot is home to a few high-tier specs, although you might want to take note of its drawbacks first. For starters, it does not go all out on performance, running on a Qualcomm Snapdragon SiP 1 eight-core 64-bit engine that peaks at only 1.8GHz

, whereas a lot of its eight-core contemporaries use engines that clock in at 2.2GHz or higher. Its SiP 1 chip, by the way, is a collaboration between Asus, Qualcomm, and Chinese brand USI that integrates main processing components like RAM, audio codec, modem, and app processor into a single package. 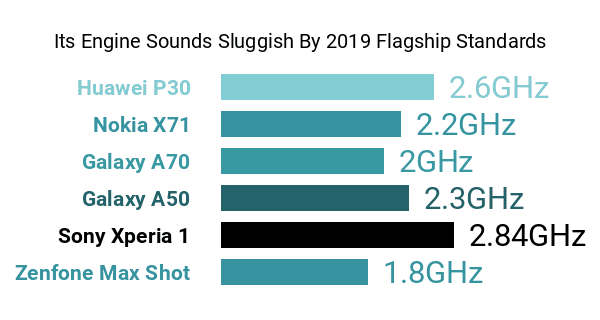 Don't Buy The Asus Zenfone Max Shot Before You Check:

Accompanying its CPU is a 4GB/3GB RAM

that is somewhat sober, at least compared to the 6GB RAMs offered by a few tantamount phones listed here on Phonerated. Its 64GB maximum internal memory

sounds like a con as well, although it's easily brushed aside by the Max Shot's support for up to 2TB's worth of external memory

perched on its rear side, bringing to mind some of the best photography-focused smartphones around. It consists of a 12-megapixel Sony-IMX486-sensor main cam, an 8-megapixel 120-degree wide-angle cam, and a 5-megapixel depth-detection cam. Together, the forenamed lenses offer hardware-level bokeh photography, AI scene detection, and 3-axis electronic video stabilization. Sitting up front is an 8-megapixel LED-flash-equipped selfie camera that's neither impressive nor disappointing, at least by the mid-end standards around the time of this on-paper review.

Also among its pros is a 4000mAh battery boasting some above-average self-attributed scores, including a 44-hour 3G talk time

, the former being over 160 percent higher than the average mark when we were checking it out. Explore our list of the best high-stamina phones here. 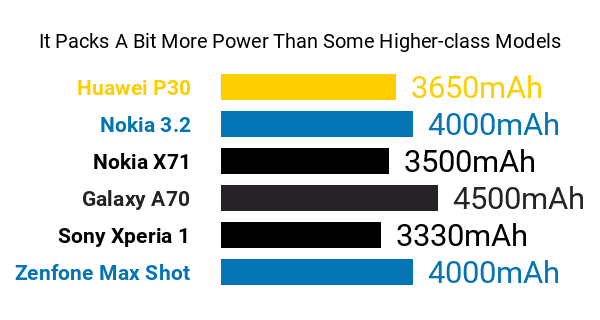 Wrapping up, the Zenfone Max Shot seems like a solid middle-class purchase for those who want a high-endurance, photography-driven smartphone.