The Azumi Kinzo Ichi A5QL boasts a great deal about its camera specs, but the only thing that stands out in its collection of imaging features is the front-facing LED flash

. Both the 8-megapixel rear camera and 5-megapixel selfie shooter are just average

, and both can also be found in a lot of other unlocked budget smartphones within this device's price range. 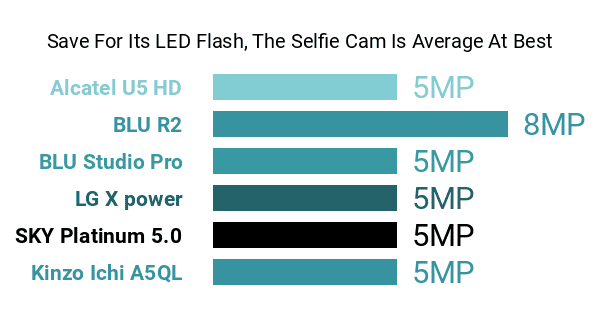 Don't Buy The Azumi Kinzo Ichi A5QL Before You Check:

However, the A5QL can freely take pride in its physical specs. At 136 grams

, it's a potential satisfaction mine for portability-conscious folks. 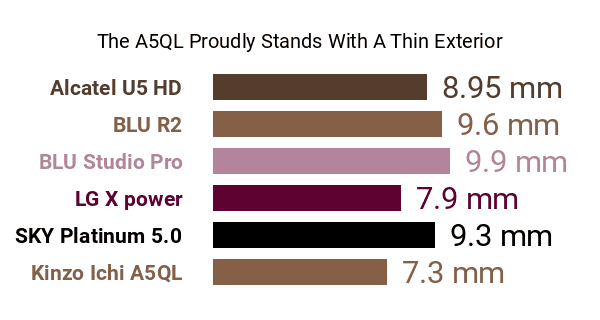 Moving on to other pros and cons, this 5-incher offers a relatively-good 294DPI pixel density

, courtesy in part of its 1280-pixel by 720-pixel resolution. Its RAM appears promising at 2GB

, as well. However, the below-average clock speed (1.25GHz, specifically)

The subject of its battery-related pros and cons presents some contradictions. For one, its 23-hour manufacturer-rated 2G talk time

is way above the category average of 12 hours. However, it sustains itself on stand-by for only 200 hours

looks small in comparison to many its rivals'.

While it may not be among the stand-outs of the budget smartphone category, the Kinzo Ichi A5QL still presents a pretty balanced mix of good and bad points. However, if the size of its battery or the sub-par speed of its CPU are too bothersome, we suggest you try out our Celliminator Phone Finder, which helps you find your five best phone matches. Best of luck!