Simply put, there is nothing legendary about the Coolpad Legacy S, at least insofar as our review of its pros and cons are concerned. In fact, its mix of specs pin it to the entry-level prepaid smartphone category.

One of its biggest drawbacks is its 2450mAh battery

, which we find somewhat underwhelming, knowing that a few other models that hover around the same price point (It retailed for 100 dollars at the time of this data-driven Phonerated review) pack 3000mAh batteries. It does offer 17 hours of continuous talk time, though, which was a bit higher than the average mark at the time of its market entry.

Don't Buy The Coolpad Legacy S Before You Check:

Still on its hardware cons, the Legacy S ignores the fact that octa-core smartphones were all the rage (even among budget phones) when it came out, instead settling for quad-core MediaTek Helio A22 processor clocked at 2GHz. Working alongside its engine is a 2GB RAM

that we consider a telltale sign of a low-end smartphone.

that makes its screen a bit wider versus what a lot of its entry-level competitors offer -- low-end Androids usually stick to the 16:9 aspect ratio. By the way, don't forget to pop open our list of the best wide-screen phones here. Sadly, HD+ (1440 x 720) screen is marred by a TFT architecture

, which a lot of our tech-savvy friends consider inferior to other technologies like IPS and AMOLED. 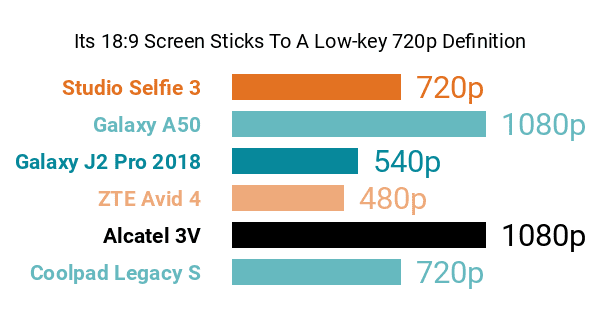 sits right above its display. At the very least, its selfie cam carries the phone's 2D facial recognition system

, a security facet that some users prefer over the more conventional fingerprint recognition.

In summary, the aforementioned pros and cons make this Coolpad model a fitting choice for shoppers who have simplicity in mind.