The third iteration of Google's self-branded Pixel flagship comes in the form of the 5.5-inch Pixel 3, which, despite leveling with some of the best smartphones of its time on certain aspects, suffers from a few questionable cons. For one, unlike some of its contemporaries, it does not go all-out in terms of storage, settling for a 128GB maximum internal memory

. In comparison, a few close competitors boast 256GB or even 512GB of native storage and come with external memory card trays. 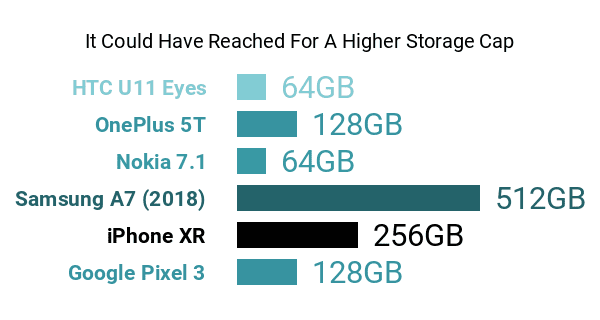 Don't Buy The Google Pixel 3 Before You Check:

, considering that 2018 saw a few heavyweights that boasted 6GB or even premium-class 8GB RAM counts (Check out Phonerated's list of 8GB-RAM phones here). Having said that, its processor, which is a Qualcomm Snapdragon 845 split-octa-core chip clocked at 2.5GHz + 1.6GHz

, makes sure that it stays within flagship territory performance-wise, at least as far as this on-paper review of its pros and cons is concerned. 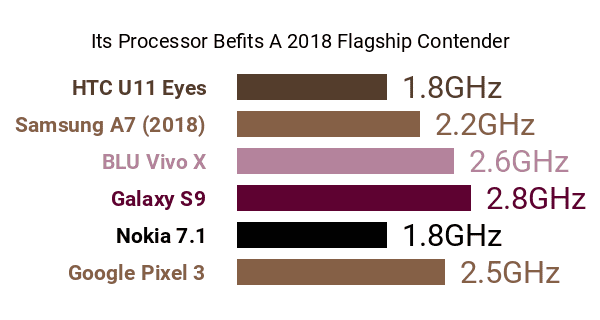 , although it falls short of the 500ppi sweet spot for VR-ready smartphones, scoring only a 443ppi pixel density

. Additionally, its display is bedecked with an Always-On feature, support for HDR content, and an impact-resistant Corning Gorilla Glass 5 finish

While it does away with a dual-lens rear camera setup, which was somewhat the go-to imaging solution around the time it hit the market, the Pixel 3's 12.2-megapixel dual-pixel camera, which is rigged with spectral and flicker sensors, a 4K-2160p video-recording option, as well as both optical and electronic image stabilization

, still makes the upmarket cut in our book. What is more interesting, though, its its dual 8-megapixel selfie camera

that is made up of a 97-degree wide-angle lens and a standard-angle lens. 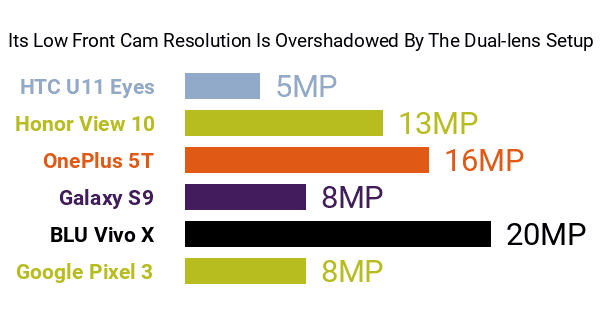 Rounding out its pros and cons is a 2915mAh battery that powers up either through the phone's 18W fast charger or through Qi wireless charging. Note, though, that a few competing models with tantamount specs pack up to 4000mAh of raw battery power

. This Pixel edition is made waterproof and dust-tight by its IP68 rugged certification

and it comes with a Gorilla Glass 5 backing. 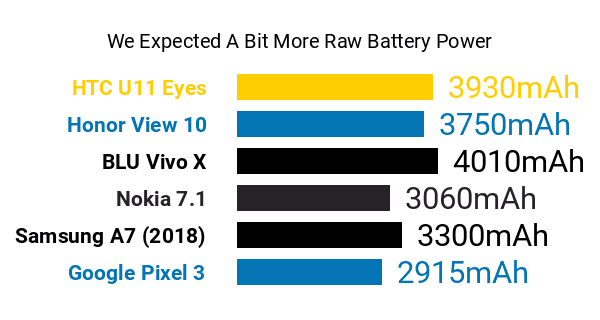 Running on the Android 9.0 Pie platform, the Google Pixel 3 serves as a solid choice for tech-savvy users seeking a high-caliber Android.

It comes with native support for Virtual Reality (VR) content, which it delivers mainly through Google's Daydream View headset.

Its processor speed of Quad 2.5GHz (+ Quad 1.6GHz) with 8 cores is among the fastest in the current market.

It carries the Miracast technology, a system that lets you share your display with a TV

We are talking about an above-average screen, making it a phablet: 5.5 inches and a resolution of 2160 x 1080 pixels means about 12.1 square inches and an image sharpness of at least 443 dots per inch (DPI)!