A middle-class smartphone in terms of technical pros and cons, the Google Pixel 3a XL shares its Pixel 3a little brother's biggest weak points, namely, a relatively cheap polycarbonate unibody

64GB internal memory, the latter at least accompanied by unlimited cloud storage for photos and videos through Google Photos.

Don't Buy The Google Pixel 3a XL Before You Check:

, which is a slight con, at least by mid-range smartphone standards. That aside, it also brings back the 3a's 12.2-megapixel dual-pixel primary cam, which, although flounders in comparison to those of the best camera phones found here on Phonerated in terms of raw pixel resolution, still features some high-class imaging pros, including a 4K (2160p) maximum video capture resolution

as well as both electronic and optical image stabilization

sitting on an 18:9 aspect ratio and a 2160 x 1080 Full HD+ definition, mimicking those of some popular large-screen models on the market as we were reviewing its specs. It comes with an Always-on mode and true black level support.

This Pixel edition is powered by a respectable 3700mAh battery

, which is a nice upgrade over the plain 3a's 3000mAh-only cell. That said, it runs on similar hardware components as its sibling phone, particularly, a middle-class Snapdragon 670 2GHz + 1.7GHz eight-core processor and a 4GB LPDDR4X RAM. 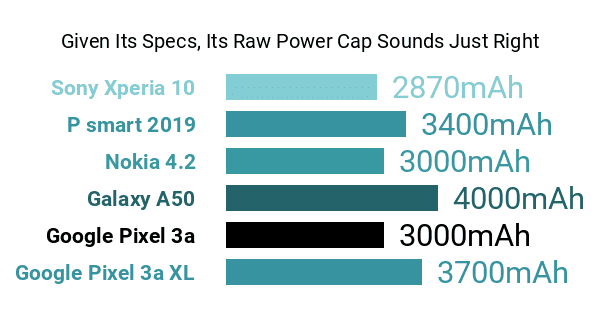 Also part of its pros and cons are double stereo speakers, a rear-mounted Pixel Imprint fingerprint detector that's mainly for security and NFC-based transactions, and an eSIM (a SIM card integrated into the device) to go along with its single nano SIM card tray.

** This phone is also known as: Google 3a XL