A revamped version of Huawei's 2018 Honor 8 that's more attuned to gaming and photography, the Huawei Honor 8X banks on a wide display and some respectable hardware specs. Still, though, our review of its pros and cons reveal some slightly disgruntling drawbacks. For starters, while its dual-cluster Kirin 710 eight-core engine

, which clocks in at 2.2GHz + 1.7GHz, lines up with the chips powering some popular eight-core models, its 4GB RAM count

won't turn any heads, at least versus the 6GB or even 8GB RAMs boasted by several full-blown gaming smartphones.

Don't Buy The Huawei Honor 8X Before You Check:

Nonetheless, the 8X makes for a mid-market gaming Android with its Mali-G51 MP4 aided by GPU Turbo

, a feature that boosts the phone's graphics processing efficiency and reduces strain on its main processor, obviously for heavy gaming marathons and multimedia processing.

The Honor 8X's display, although marred by a 397ppi-only pixel density count

(VR-worthy phones usually reach 500ppi on that front), is a spacious 6.5-inch FullView screen with a 19.5:9 aspect ratio

and a 2340 x 1080 Full HD+ sharpness. Its facade is powered by a 3750mAh battery, which was neither a disappointing con nor a reassuring pro as of this Phonerated write-up.

This Honor model's selling points are joined by a couple of relatively high-resolution cameras. At the back, it touts a dual-lens camera consisting of a 20-megapixel f/1.8-aperture primary lens

and a modest 2-megapixel-only depth sensor

. Its imaging perks are led by AI scene recognition and phase-detection autofocus (PDAF), but it passes up on a 4K-2160p video-recording capability

. Sitting on its display notch is a 16-megapixel front-facing camera

whose raw pixel resolution leveled with those of some strong selfie-driven contenders available when it was released. 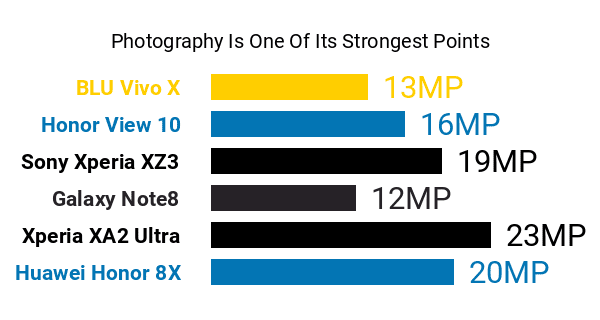 , a rear-mounted fingerprint detector, and Face Unlock. It is glazed with a nano-scale optical coating and it comes in colors like Red and Pink.

In the end, the Honor 8X winds up as a feasible choice for shoppers eying a phone that's focused on photography and mobile gaming.

** This phone is also known as: Huawei 8X