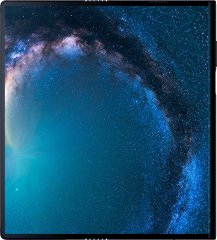 
Announced during the 2019 Mobile World Congress (MWC), the Huawei Mate X is Huawei's first attempt at a foldable flagship phone, combining its rather innovative two-in-one form factor with the high-end pedigree of the brand's Mate smartphone series. In its unfolded form, it greets users with an 8-inch OLED 2480 x 2200 display

tailored to games and multitasking, consequently measuring only 5.4mm thin

Don't Buy The Huawei Mate X Before You Check:

Despite those ultra-high-end (as we were reviewing its specs) facets, however, our keen eye for pros and cons still caught a couple of setbacks along the way. For instance, it only supports 256GB of external memory

, which sounds quite low, especially compared to the 2TB memory card slots boasted by some older high-end contenders. It does offer a hefty 512GB native memory, though. Its 295g body weight

also makes it sound bulkier than most other flagship models listed here on Phonerated.

Although the Mate X does not feature a dedicated selfie camera

, we're not going to call it a con just yet, since it packs a triple camera system co-engineered with Leica

that rubs elbows with those of some of the best photography smartphones available. It consists of a whopping 40-megapixel primary wide-angle cam, a 16-megapixel ultra-wide cam, and an 8-megapixel telephoto cam. The aforementioned camera can be used to snap selfies when the phone is folded.

clubbed with 8GB of RAM

and a Mali-G76 graphics processor. These are powered by a 4500mAh battery infused with Huawei's 55W SuperCharge technology, which claims to replenish up to 85 percent of its total power capacity after a 30-minute charge

Overall, given the mix of pros and cons that it brings to the table, the Huawei Mate X caters to those who want to complement their upscale lifestyles with a premium-class folding Android.