This 2019 edition of Huawei's Y5 closely follows its predecessors' budget-class pros-and-cons profiles, with its not-so-appealing specs being led by a meager 2GB RAM count

, the latter of which is easily overshadowed by the engines powering the market's prominent eight-core smartphones.

(Huawei also ships a 16GB-only version), which is at least accompanied by a reassuring 512GB external memory card slot

. The rest of its hardware pros and cons include a passable 3020mAh battery promising a couple of above-average stress test scores, particularly, a 74-hour music playback time

and a 16-hour video playback time.

, which the brand claims as water-resistant (like genuine leather) and fingerprint-free. Take note that the aforementioned finish was not that common of a facet among similarly-specked smartphones as of this on-paper Phonerated review.

whose architecture brings to mind some of the best phablets and large-screen models around, although its modest 1520 x 720 HD+ resolution

makes sure that it stays within entry-level Android boundaries. 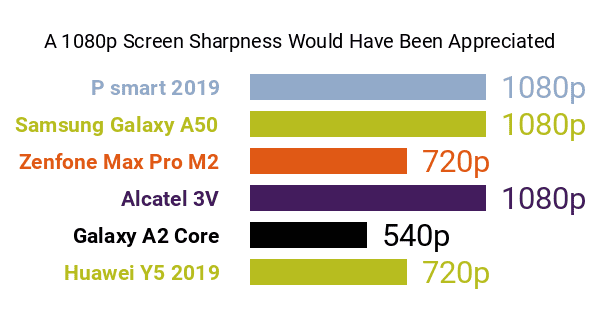 With the Android 9.0 Pie platform overlaid with Huawei's self-branded EMUI v9.0 topping off its list of pros and cons, the Y5 2019 caters to shoppers eying a wide-screen Android with a bit of flair on the design front.