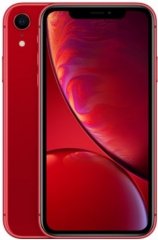 
Completing the three-iPhone batch unveiled by Apple during their September 2018 event, the iPhone XR caters to those who do not fancy industry-breaking specs, but nevertheless want a large-screen, multimedia-driven phone.

, which is another way of saying that Apple managed to extend its screen onto its rounded corners for an all-screen concept, its display specs are marred by cons like a measly (by 2018 high-end standards) 1792 x 828 pixel resolution

. Having said that, its display pros, which include a flagship-class 625 cd/m2 maximum brightness level

as well as support for Dolby Vision and HDR10 content

could still land it a spot alongside the best phablets of its time. 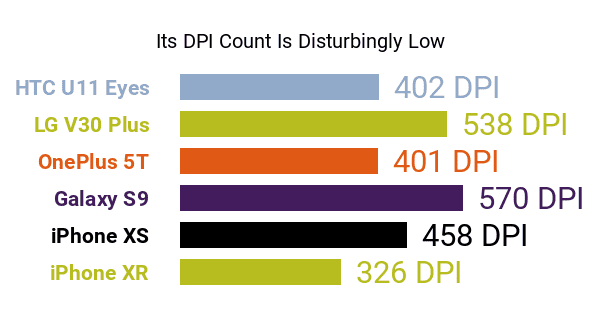 Don't Buy The iPhone XR Before You Check:

When it comes to photography, the XR is not as ambitious as we had hoped, settling for a lone 12-megapixel camera on its rear

, despite dual cameras being the go-to setups among the best imaging smartphones as we were reviewing its pros and cons. Notwithstanding, Apple equipped it with upmarket (as of this Phonerated write-up) perks, such as a quad-LED true-tone flash

Up front, it features a 7-megapixel selfie camera

whose raw pixel resolution sounds elementary compared to those of the best selfie-driven smartphones as of its debut, some of which reach resolutions of more than 20 megapixels. Just like its XS and XS Max cousins, though, the XR's front cam carries the Face ID user facial recognition system alongside a Retina Flash (Apple's version of a screen flash) and Portrait Lighting. 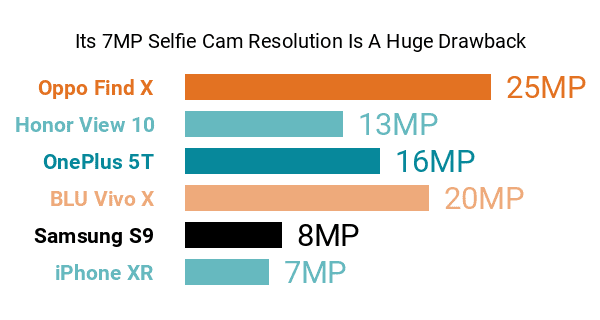 As for its hardware pros and cons, the iPhone XR banks on the six-core A12 bionic chip, which is coupled with a Neural Engine

, promising to be up to 15 percent faster than the A11 chip powering predecessors like the iPhone X and the iPhone 8. Its battery stress test scores, which include a 25-hour talk time and a 65-hour continuous audio playback time

, do not sound too shabby either. On storage duties is a non-expandable

256GB on-board memory, though 128GB and 64GB versions, obviously for less-demanding users, are available as well.

that's coated in colors like Coral, Yellow and Blue, crowning it as a large-screen iPhone for users eying a not-too-ambitious wide-screen iPhone.

We're delighted that the iPhone XR can record fancy 3840 x 2160 videos, but we're surprised we didn't find any sign of the XR sporting an HDMI port (which comes in handy to watch HD videos on your shiny HDTV without having to move them first to your computer).

It is promoted as more resistant to water, dust and shocks.

NFC can be used for electronic payment systems and other uses.

We are talking about an above-average screen, making it a phablet: 6.1 inches and a resolution of 1792 x 828 pixels means about 14.18 square inches and an image sharpness of at least 326 dots per inch (DPI)!