and its consequent palm vein recognition system (Hand ID), which treats the user's hand as a biometric measure for phone security -- feel free to check out other smartphone innovations here. Furthermore, it is also among the first few smartphones to offer what LG calls the Crystal Sound OLED technology

, which essentially uses the phone's display as a speaker diaphragm and consequently removes the need for actual front-firing speakers. Speaking of display, this G-series model touts a premium-class (as of this specs-based review) 6.1-inch 3120 x 1440 QHD+ 19.5:9 OLED 564ppi screen

that calls up Phonerated's list of the best phablets and large-screen models available. 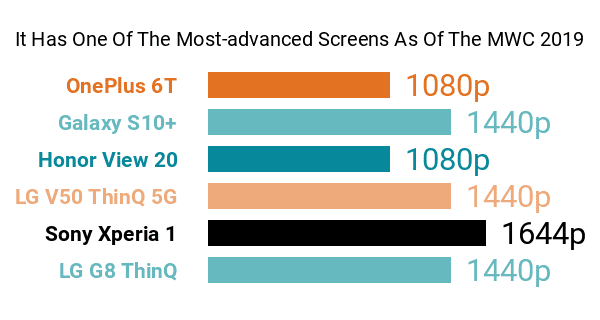 Don't Buy The LG G8 ThinQ Before You Check:

Regrettably, like its V50 ThinQ 5G cousin, the G8 ThinQ has its fair share of cons hardware-wise, particularly, a 128GB-only internal memory

and a 6GB RAM count

, both of which sound unpromising versus the 256GB/512GB storage caps and 8GB RAMs boasted by several tantamount models. Its aforementioned native memory cap is accompanied by a whopping 2TB external memory allowance

, though, while its 6GB RAM works hand-in-hand with a Snapdragon 855 triple-cluster eight-core engine peaking at 2.84GHz

that made it one of the fastest smartphones on the market as we were writing this. 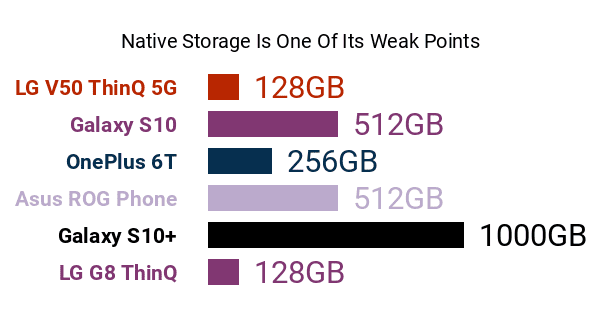 , taking into account its high-octane engine and compatibility with LG's ThinQ ecosystem

, the latter being an IoT (internet of things) of compatible LG appliances and electronics.

Speaking of multimedia, the G8 ThinQ banks on an AI-powered dual rear camera

comprising of a 12-megapixel standard cam and a 16-megapixel Super Wide cam. Additionally, it touts a dual-lens front-facing camera system

that's made up of a conventional 8-megapixel main camera and a ToF (time-of-flight) Z camera tailored to 3D photography and user facial recognition. Completing its threefold biometric authentication system (hand + face + and fingerprint) is a rear-mounted fingerprint scanner sitting right under its rear camera.

Rounding out this ThinQ model's pros and cons is the DTS:X 3D Surround Sound audio technology as well as its IP68 and MIL-STD-810G rugged ratings

, which top it off as a viable choice for techies who are always on the lookout for mobile innovations.