The Q6 brings LG's FullVision display to the mid-range market. Previously-seen on the flagship smartphone G6, this feature is characterized by an almost-bezel-free edge-to-edge screen

, the Q6 is left to display an encouraging sharpness of 442DPI 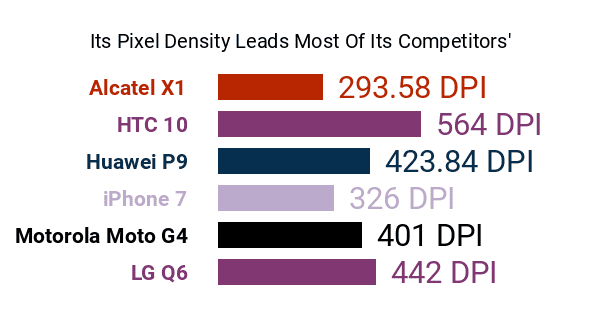 Don't Buy The LG Q6 Before You Check:

has enough megapixel power to go head-to-head with its competitors. However, the situation at the front isn't as glowing. With a resolution of 5 megapixels, the selfie camera fails to stand out compared to many other mid-end devices

. However, it does offer the benefit of having a wide-angle 100-degree lens

, which makes the Q6 quite a hopeful prospect for avid group-selfie fans.

gives it a somewhat-utilitarian vibe, while still maintaining a sophisticated appearance. Its MIL-STD-810G certification

also brings in an added rugged factor. However, this has resulted to an 8.1mm-thick profile

, which makes the Q6 bulkier than the average model that we usually see in its subcategory.

Talking about performance pros and cons, this device attempts to enhance its profile by boasting 3GB's worth of RAM

. However, this may potentially be offset by the octa-core

To top off these pros and cons, it's worth mentioning that the LG Q6 has apparently prioritized heavy-duty users. With a relatively-competitive 3000mAh battery

, it appears ready to take on more tasks than the average smartphone.

If you would like to experience the edge-to-edge displays that are continuously gaining popularity (but without shelling out for a top-shelf smartphone), then the LG Q6 sure looks like an interesting buy. However, note that it's probably not for the speed-conscious, and nor is it for those who are into big and bold selfie cameras. If you belong to these latter categories, then you might wanna direct your focus elsewhere.