One of LG's most-ambitious 2018 releases comes in the form of the large-screen V40 ThinQ, which, incidentally, is one of the earliest smartphones to rock five distinct cameras

-- three at the rear and two up front. For all its pros on the imaging front (We'll dive into details further down this specs-based review), however, this ThinQ model suffers from a couple of questionable cons, including its 3300mAh-only raw battery power

, which sounds unimpressive, knowing that some of the best big-battery phones available reach up to 5000mAh's worth of power. Its 64GB-only native storage memory

comes off as underwhelming as well, since several tantamount phablets start out with 128GB of native memory. That being said, it does support a whopping 2TB's worth of external space

Don't Buy The LG V40 ThinQ Before You Check:

Going back to its imaging perks, the V40 ThinQ's triple-lens rear camera setup is made up of a 12-megapixel standard lens, a 12-megapixel telephoto lens, and a 16-megapixel wide-angle lens, with its imaging features being led by AI Cam (for AI-aided photography) and the Cine Shot option that lets users animate certain objects in photographs. Additionally, its 3 lenses can work independently of each other, giving users three distinct previews for certain shots. On the flip side, its dual front cam consists of an 8-megapixel standard-angle main lens coupled with a 5-megapixel 90-degree-angle subsidy lens, with LG's signature Selfie Light feature tagging along. 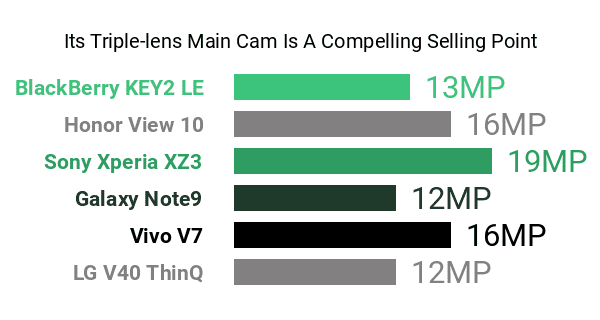 , which is essentially a closed internet of the brand's smart appliances and gadgets -- imagine setting up a smart refrigerator using your smartphone.

Apart from photography, this LG model flexes some flagship muscles when it comes to display as well, boasting a 6.4-inch QHD+ (3120 x 1440) OLED display

that possibly plugs it into Phonerated's list of the best phablets on the market. Its aforementioned facade comes with an expansive 19.5:9 aspect ratio and scores a 538ppi pixel density

, the latter reminding us of some popular VR-ready models.

, its processing pros and cons nevertheless made it one of the fastest smartphones when it hit the market, running on a Snapdragon 845 eight-core engine clocked at 2.8GHz + 1.7GHz, with heat pipes (for dissipating heat) at the ready as well. 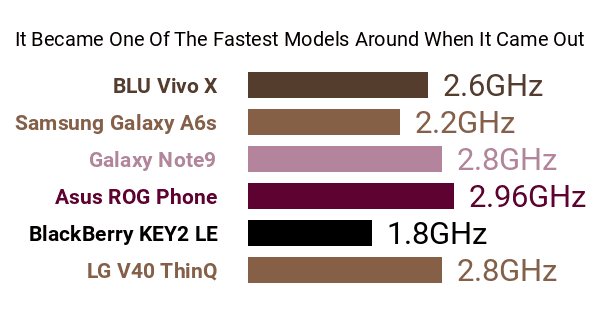 A few other features include an IP68-rated water- and dust-tight housing, front-and-back Gorilla Glass 5 protection, and military-grade (MIL-STD-810G) shock-resistance

. Its color options include Aurora Black and Moroccan Blue.

So, when it comes to pros and cons, the LG V40 ThinQ certainly makes the 2018 cut for a flagship-caliber smartphone, with emphasis on its highly-competitive screen and camera setup.