One of two flagship-caliber smartphones announced by LG during the 2019 Mobile World Congress, the other one being the G8 ThinQ, the LG V50 ThinQ 5G's biggest pros are given away by its name. For one, it is among the brand's first 5G-enabled smartphones

, rocking the Snapdragon X50 5G modem alongside its other hardware specs, which we'll also be breaking down in this on-paper review. Its ThinQ branding

also means that it is part of LG's network of AI-equipped devices, allowing users to interact with ThinQ appliances, such as refrigerators and smart TVs, using their smartphone.

Going back to its hardware components, this highly-competitive V-series model sadly settles for only 128GB of native memory

, whereas a few closely-comparable phones pack 256GB or even 512GB of raw storage. It does, however, support up to 2TB's worth of external memory

Don't Buy The LG V50 ThinQ 5G Before You Check:

(Other high-end MWC releases come with 8GB or higher RAM counts). That being said, the V50 brushes shoulders with some of the fastest smartphones available, running on Qualcomm's Snapdragon 855 eight-core engine

, which consists of a 2.84GHz primary cluster accompanied by 2.41GHz and 1.78GHz deputy clusters. 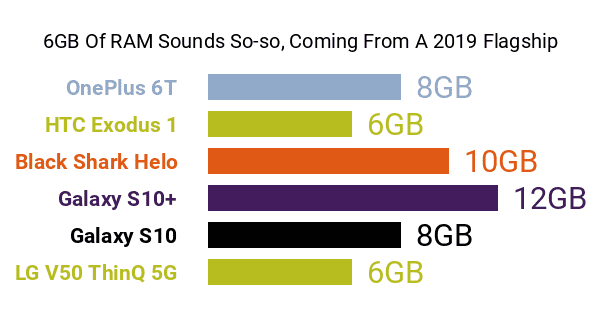 that lines it up with some of the best phablets around. More interestingly, though, it is compatible with LG's Dual Screen

, an optional cover-like accessory that acts as a secondary 6.2-inch display for an enhanced gaming or multimedia experience. Speaking of gaming, this LG model is equipped with a vapor chamber cooling system

. Adding to its multimedia features is the DTS:X 3D Surround Sound audio system

As for its photography pros and cons, the V50's triple-lens primary camera

resembles those of some of the best photography phones listed here on Phonerated. It consists of a standard 12-megapixel cam, a 12-megapixel telephoto cam, and a 16-megapixel Super Wide cam. Up front, it features a rarely-seen (as of its debut) dual-lens selfie cam

made up of 8- and 5-megapixel lenses.

Stamina-wise, the V50 does not exactly sound monstrous, at least compared to some of its closest competitors, touting a tolerable 4000mAh battery. Its IP68 (waterproofing) and MIL-STD-810G (shock-resistance) rugged certifications

Wrapping up, considering its ambitious assortment of pros and cons, the V50 ThinQ 5G caters to a tech-savvy clientele who care most about multimedia and productivity.