LG's Velvet is a premium-class 5G-ready

smartphone (although there seems to be another model particularly called the Velvet 5G) whose array of pros and cons is headlined by a 6.8-inch OLED display with a wide 20.5:9 aspect ratio

and the brand's 3D ARC Cinema FullVision architecture. That being said, its spacious screen settles for a 2460 x 1080 Full HD+ resolution only

, which sounds a tad underwhelming, considering that some of the best phablets available at the time of this specs-driven Phonerated review boast 2K-1440p or Ultra HD definitions. This large-screen model is also compatible with LG's signature Stylus Pen accessory. 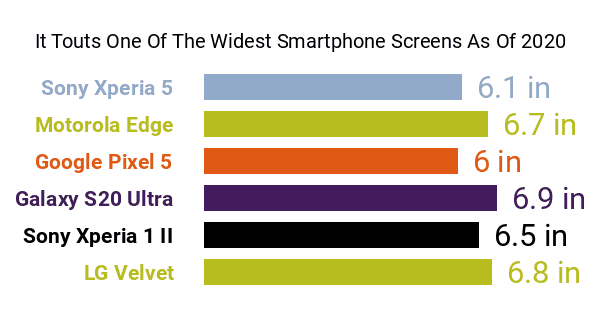 Don't Buy The LG Velvet Before You Check:

(LG also mentions Qualcomm SM7250G), which runs at 2.4GHz. It is accompanied by an Adreno 620 graphics engine and a 6GB RAM

, the latter of which winds up as a slight con in our book, if only because some of its flagship-caliber rivals pack at least 8GB of RAM. Joining its hardware components is a 4300mAh battery that's enabled for wired fast charging as well as wireless charging using an after-market accessory.

consisting of a high-resolution 48-megapixel f/1.8-aperture main cam, an 8-megapixel wide-angle cam that's mainly for landscape photography, and a 5-megapixel depth sensor. Its rear cam system captures 4K (3840 x 2160) videos and is capable of 10x digital zooming. Up front, there is a respectable 16-megapixel selfie camera. Also among its multimedia perks are video/audio-recording features like ASMR and Voice Bokeh, with the LG Creator Kit joining in as well.

The Velvet is loaded with 128GB of on-board memory and it supports up to 2TB's worth of external space, which sounds generous, at least when compared to the 512GB or 256GB memory expansion caps offered by a few comparable models. It runs on the Android 10 platform and it dons either an Aurora Grey or an Aurora White finish.

All said, the LG Velvet's mix of pros and cons has its fair share of drawbacks, but its high-class camera and wide display nevertheless make it a solid flagship multimedia phone.