The cheapest and lowest-specked variant out of four Moto G7 models released by Motorola in Q1 of 2019, the Moto G7 Play's list of specs is marred by cons like a paltry (by 2019 mid-range standards) 2GB-only RAM 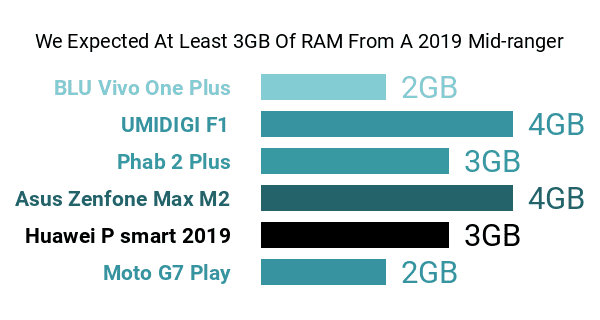 Don't Buy The Motorola Moto G7 Play Before You Check:

, which, as we were reviewing its technical pros and cons, was somewhat a standard facet among Android phones.

Although its expansive 19:9 screen aspect ratio

winds up as an appreciable pro in our book, seeing that it brings to mind some of the best large-screen phones around, the fact that its 5.7-inch screen sticks to a low-class 1512 x 720 HD+ resolution

and scores a measly pixel density count of 294ppi

, which is married to a water-repellent (p2i nano-coating) body

Going back to its hardware components, this G7 spinoff sounds rather stingy compared to several of its middle-class rivals when it comes to internal memory, offering only 32GB on that front

, whereas some of its competitors start out with 64GB or 128GB. We would not worry so much about it, though, since the G7 Play supports monstrous 512GB microSD cards

. Also, considering its assortment of pros and cons, its 3000mAh battery, which powers up through a 10W rapid-charging system, sounds reasonable to us.

, and Google Lens integration, the latter being an image-recognition app that lets users search for an item's details on the internet by snapping a photo of it. Sitting above its screen is an 8-megapixel f/2.2 selfie camera that's spruced up by a dedicated LED flash

-- the other G7 variants only offer screen flash functions.

With the Android 9.0 Pie operating system rounding things out, the Moto G7 Play caters to those who want an imaging-driven smartphone, but aren't ready to go for a full-blown flagship model just yet.

** This phone is also known as: Motorola G7 Play