A little brother to the G8 and G8 Plus variants in terms of technical pros and cons, the Motorola Moto G8 Play offers some hints of the high-end combined with a couple of middling specs. For instance, it otherwise wide 6.2-inch 19:9 display

, which levels with those of some full-fledged flagship phablets featured here on Phonerated, suffers from a 1520 x 720 HD+ definition

Don't Buy The Motorola Moto G8 Play Before You Check:

(MediaTek Helio P70M), if only because it pales in comparison to the engines powering some of the best eight-core smartphones on the market around the time of this data-driven review. It comes with no more than 2GB of RAM

and it has only 32GB of native storage that can at least be expanded by a maximum of 512GB.

Like a few other Moto models that were released by Motorola in 2019, the G8 Play's pros include a multi-lens camera setup

, its version being composed of a 13-megapixel f/2.0-aperture main lens clubbed with a 2-megapixel depth sensor tailored to portrait shooting and a 117-degree-wide 8-megapixel lens for scenic shots. Its triple camera setup is infused with AI features, while a so-so 8-megapixel selfie cam sits on its tiny screen notch.

that sounds hearty enough to us, knowing that a few tantamount phones running on similar hardware components do not pack anything more than 3000mAh. This Moto G model also has a fingerprint scanner, standard 4G-LTE network connectivity, and a coating of either Raspberry or Obsidian Gray. 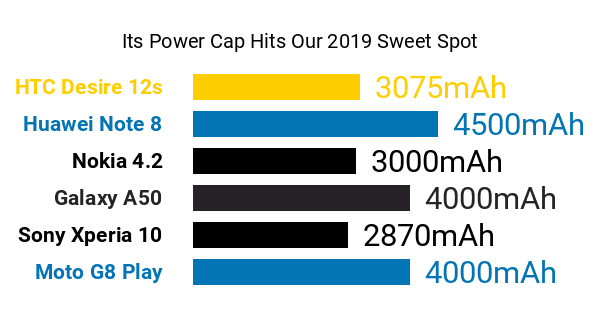 With the Android 9.0 Pie OS tying all its pros and cons together, the Moto G8 Play sounds like a solid choice for budget-cautious shoppers who want to play around with a three-lens cam and AI imaging.