Primarily aimed at mid-end Android shoppers who love snapping photos, particularly macro ones, the Motorola One Macro does not impress us when it comes to hardware pros and cons. It settles for a 2GHz-only Helio P70 eight-core engine

and only 4GB of RAM, while many performance-driven contenders use engines that do not clock in any lower than 2.5GHz. Its lack of NFC (Near Field Communication)

support sounds a tad problematic as well, since such facet was somewhat standard within this price group as of this on-paper Phonerated review.

Don't Buy The Motorola One Macro Before You Check:

Adding to those cons is the One Macro's 6.2-inch 720p-only display, which scores a mere 270ppi definition

that we consider a letdown, especially when compared to the 1080p, 400ppi screens offered by a few models packing roughly similar specs.

As for its pros, this Motorola model's namesake is the triple camera setup

on its rear, consisting of a 13-megapixel main lens, a 2-megapixel depth sensor, and a dedicated 2-megapixel macro lens, the latter obviously tailored to picking out fine details for macro photography. It also comes with a ToF camera enabling the Laser Autofocus technology and a standard LED flash. Sadly, even though its rear cam possibly plugs it into our list of popular photography smartphones, the One Macro's 8-megapixel frontal camera

is not as competitive as we had hoped -- some of the best selfie-first phones available bluster with 25-megapixel (or higher) selfie shooters.

Also on board is a respectable 4000mAh battery

aided by a 10W rapid-charging system, a 64GB internal memory extendable by a maximum of 512GB, and an IPX2-rated water-repellent exterior 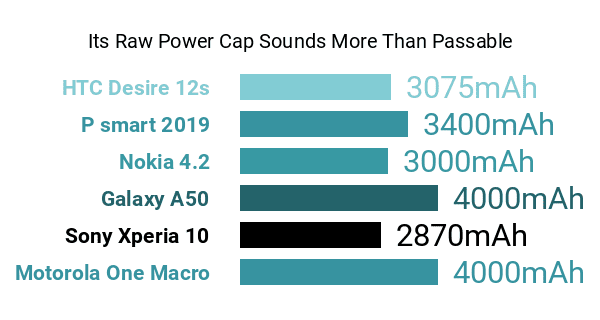 Speaking of exterior, this model is coated in either Space Blue or Ultra Violet, which we think tops its photography-driven mishmash of pros and cons off just right.

** This phone is also known as: Motorola Macro