that made it a rather unique Android phone around the time of this review of its pros and cons (Check out the market's best smartphones here). Despite its unusual design concept, though, some of its specs are not as appealing as we had hoped.

The biggest problem about this folding phone seems to be battery life, seeing that it has a mere 2510mAh battery

. In comparison, most conventional bar-type smartphones with comparable feature sets pack 3000mAh or even 4000mAh cells. Additionally, it does not come with a microSD card slot

, which we consider an outright con, although it does offer a rather hefty 128GB internal memory. 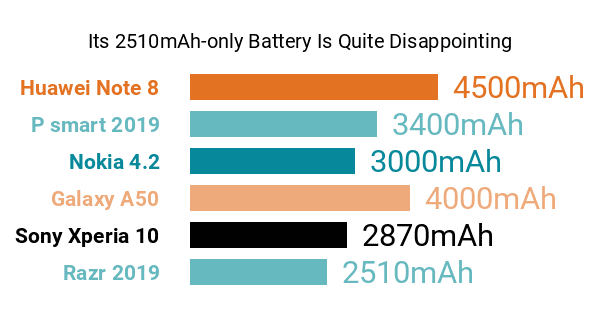 Don't Buy The Motorola Razr 2019 Before You Check:

It runs on a 2.2GHz eight-core Snapdragon 710 engine, which, although won't plug it into our list of the best octa-core phones, sounds just about right, relative to its other features. It is accompanied by a hearty 6GB RAM

Its real pro, however, comes in the form of a 6.2-inch foldable pOLED main screen

whose 21:9 Cinemavision aspect ratio brings to mind some of the most popular wide-screen smartphones on the market. It has a resolution of 2142 x 876 pixels. While the phone is closed, users can check notifications through its 2.7-inch external display

The Razr 2019, which, by the way, is weightier than many similarly-specked Androids listed here on Phonerated, at 205g

decked out with a dual LED flash and dual pixel autofocus. Up front, it touts a somewhat mundane (by 2019 standards) 5-megapixel-only selfie camera

that's at least accompanied by a screen flash function. 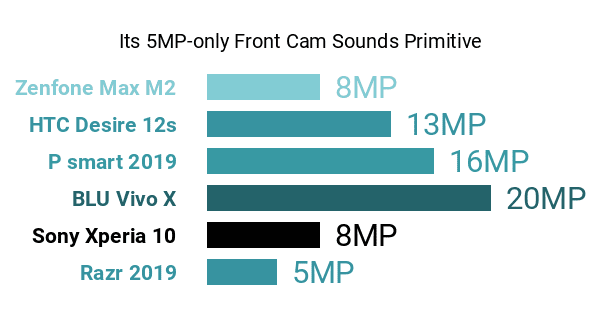 , a 15W TurboPower charging system, and NFC support. It runs on Android 9.0 Pie out of the box and it is offered in Noir Black.

With all that said, this modernized version of the Razr winds up as a viable choice for mid-level Android shoppers who are into foldable phones.