Pretty much an unsophisticated entry-level smartphone, the Nokia C1 is riddled with old-fashioned cons, including a 1.3GHz quad-core processor

, a combo that was already considered low-class even several years prior to its market entry. Moreover, it lacks 4G-LTE network connectivity

, which would have at least lined it up with many other 2019-released low-enders found here on Phonerated in terms of connectivity. 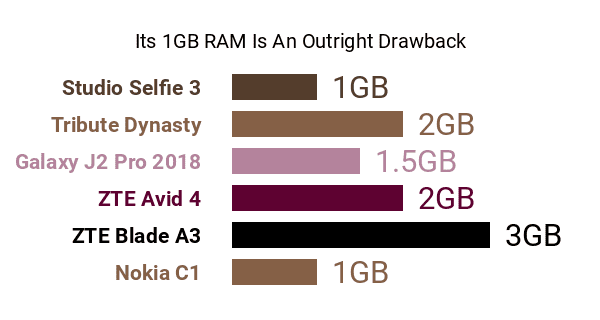 Don't Buy The Nokia C1 Before You Check:

Adding to its cons is a mundane 5-megapixel rear camera

seems like a pro to us, if only because we do not see it that often within the low-end smartphone category.

Speaking of low-end, this Nokia model runs on the Go Edition of the Android 9.0 Pie ecosystem

, which is specifically designed for low-caliber smartphones -- it has native optimization features, it has apps that are designed to take up less phone storage, and it is designed to consume less battery power than most conventional Android phones. Feel free to check out some of the market's most popular Android Go phones here.

The C1's pros and cons are powered by a 2500mAh battery, which sounds like just what it needs, considering the rest of its specs. Keep in mind, though, that a few of its rivals within this market segment pack at least 3000mAh of raw power in the tank. As for storage, its 16GB native memory and up-to-64GB external memory ceiling are by no means difference-makers, although a lot of other entry-level contenders that came out around the time of this on-paper review offer those capacities as well.

Quite the opposite of a phablet model, the C1 features a typical 5.45-inch IPS display with a 960 x 480 (FWVGA resolution

-- a good number of tantamount phones have HD+ (720p) definitions. Its body is plastered in either Black or Red.

In the end, with its kind of pros and cons, the Nokia C1 is a viable choice for users who want nothing more than a basic-level smartphone.