The OnePlus 6, a 2018 addition to OnePlus(')s lineup of flagship-caliber smartphones, extends the 5T(')s (its direct predecessor) 6.01-inch screen real estate to 6.28 inches. Just like the older model, it has an Optic AMOLED screen architecture, but this time, it comes with a 19:9 aspect ratio

that provides room a few more pixels than the 5T(')s 18:9 setup -- most high-caliber phablets as of this review of its pros and cons have 18:9 displays. Despite reaching for a spot among the best phablets on the market, however, it opts for an FHD+ (2280 x 1080) definition only

, instead of shooting for an ultra-high-end QHD+ (1440p) resolution.

Don't Buy The OnePlus 6 Before You Check:

, despite offering a more-ambitious specs list, not to mention that 3300mAh pales in comparison to the 4000mAh full-tank capacities of some tantamount phablets.

As for selfies, although the OnePlus 6(')s 16-megapixel front-facing f/2.0 selfie camera

is an appreciable pro, some tech-savvy users might consider its fixed-focus capacity

and lack of a full-blown frontal LED light

(It settles for a Screen Flash function) to be disgruntling cons.

Over on the opposite end, it touts a dual rear camera that likely puts it alongside the best smartphones for photography, made up of a 16-megapixel 1.22-micron-pixel primary cam and its 20-megapixel PDAF-equipped partner lens. Its dual cam delivers features like a 480fps HD Super Slow Motion video-capture mode 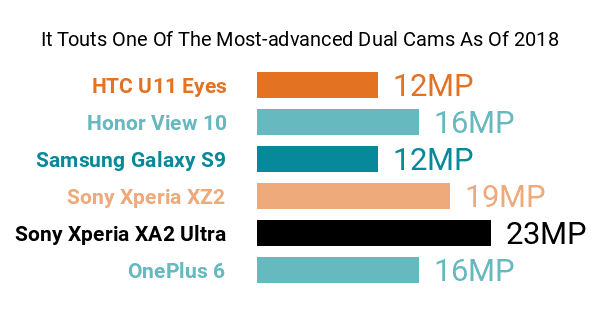 When it came out, the OnePlus 6 was the highest-specked model from OnePlus in terms of hardware pros and cons, scrapping the 5T(')s 2.45GHz eight-core engine for a Snapdragon 845 octa-core chip that peaks at 2.8GHz

, incidentally plugging it into our hotlist of the fastest smartphones. Moreover, it finds itself in elite company with its 8GB maximum RAM capacity

The OnePlus 6 does not come with a microSD card slot

for memory expansion, but it does boast 256GB(')s worth of on-board UFS 2.1 memory

. The brand also ships variants with only 128GB or 64GB of storage, probably for users who are less-demanding multimedia-wise.

Although it(')s not entirely waterproof, OnePlus indicates that this model is equipped to survive most accidental spills

, which is always a welcome facet, particularly for upmarket Android smartphones. It runs on the OxygenOS platform (based on Android 8.0 Oreo) and is shielded by back-to-back Corning Gorilla Glass 5 panels

Long story short, the OnePlus 6 is a follow-up to the 5T tailored to tech junkies looking for a high-octane multimedia-driven phablet.