A version of the OnePlus 6T flagship that's all about speed, the OnePlus 6T McLaren blusters with an ultra-high-end (as of this specs-driven review) 10GB LPDDR4X RAM

and a bevy of the autosport brand's signature design elements. Note that it also comes with lower-specked versions offering only 8GB and 6GB of RAM accordingly -- check out this Phonerated list of 8GB-RAM flagships. 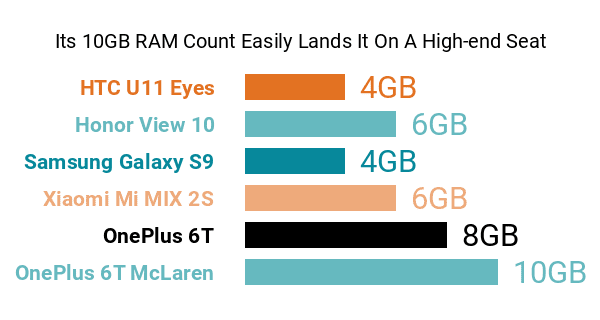 Don't Buy The OnePlus 6T McLaren Before You Check:

, a chip that supported the pros and cons of some of the fastest smartphones on the market when this McLaren Edition came out. Also joining in as an upmarket Adreno 630 graphics processor.

Going back to its McLaren pedigree, the 6T McLaren rocks a carbon fiber backing

alongside the McLaren badge and a Papaya Orange lining, making it resemble an actual McLaren race car.

Inside its premium-class shell, though, is a rather uninspired 3700mAh battery

(Some of its high-end rivals pack 4000mAh cells) that at least comes with the OnePlus's Warp Charge 30 technology, promising to replenish a day's worth of battery life after a 20-minute charge. Another con is its lack of support for memory expansion

, although its 256GB or 128GB internal storage sounds just about right for a 2018 flagship contender.

on its 6.41-inch 19.5:9 Optic AMOLED screen -- we expected a QHD/QHD+ (1440p) sharpness, considering its high-octane hardware components. Nevertheless, its aforementioned display could wind up as a pro for some tech-savvy shoppers, seeing that it comes with a damage-resistant 2.5D Corning Gorilla Glass 6 finish

and an in-display fingerprint reader

As for its photography perks, this OnePlus model boasts a 16- plus 20-megapixel dual-lens primary camera

enabled for 4K-2160p video-recording and AI-aided photography. Additionally, its 16-megapixel front cam, although sadly a fixed-focus

one, sounds just about satisfactory for a 2018-released high-ender. 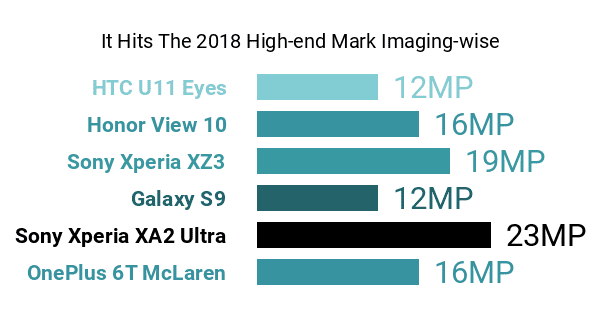 Summing up, the OnePlus 6T McLaren is a performance-first phablet whose monstrous RAM count and classy design features possibly give it an edge versus most of its competitors in the high-end smartphone race.

It's all well and good that the OnePlus 6T McLaren can record fancy 3840 x 2160 clips, but we're surprised we didn't find any sign of the 6T McLaren sporting an HDMI port (which comes in handy to watch HD videos on your shiny HDTV without having to move them first to your computer).

According to our research, it doesn't feature any memory expansion slot.

The speed of its Qualcomm Snapdragon 845 (â¯10nm chip with AIE) microprocessor (2.8GHz) spread across 8 cores is among the fastest among recent phones.

NFC can be used for electronic payment systems and other uses.