Although it is a departure from OnePlus(')s main flagship smartphone family, the OnePlus Nord still packs a solid punch when it comes to technical pros and cons. Headlining its specs is a quad rear camera

consisting of a 48-megapixel Sony IMX586 primary lens, an 8-megapixel ultra-wide lens with a viewing angle of up 119 degrees, a 5-megapixel depth-of-field sensor, and a 2-megapixel lens for macro photography. Its photography perks also include a dual-lens selfie camera

that possibly plugs it into Phonerated(')s list of the best selfie phones in town. The main selfie cam is a 32-megapixel lens, while the deputy cam is an 8-megapixel shooter angled at 105 degrees for wider shots. Keep in mind, though, that the Nord(')s front cam is limited to a fixed focus capacity

(no autofocus), which we find somewhat uncharacteristic of a 2020 flagship contender. 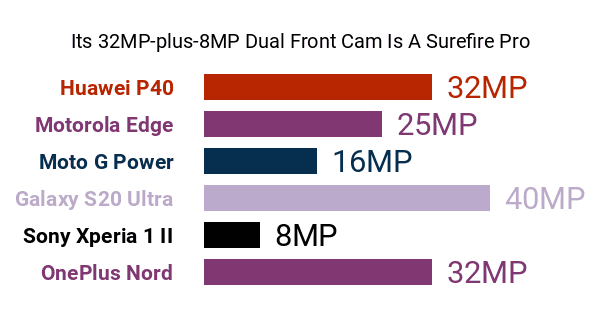 Don't Buy The OnePlus Nord Before You Check:

Its cons also include the absence of a microSD card slot

for storage expansion, especially since its highest-specked variant comes with only 256GB of storage -- a few comparable models have 512GB of on-board memory. Also, it opts for a 1080p-only screen resolution only

, instead of going for a truly-premium 1440p facade, but we find this drawback a bit forgivable, considering its 6.44-inch Fluid AMOLED screen(')s 90Hz refresh rate

and wide 20:9 aspect ratio. Learn how its screen fares versus those of the best wide-screen smartphones here.

Doing the grunt work for this 5G-ready OnePlus model is a Snapdragon 765G 5G eight-core processor, whose fastest cluster peaks at 2.4GHz. It is accompanied by either 12GB

or 8GB of LPDDR4X RAM, while a 4115mAh battery takes on the power duties. Speaking of battery, its aforementioned battery pack is aided by the Warp Charge 30T fast-charging technology, a common pro among OnePlus smartphones.

A couple more of its bells and whistles include an in-screen fingerprint reader and a super linear speaker, both of which line it up with a few other high-class Androids that came out around the time of this technical review.

Topping off the OnePlus Nord(')s pros and cons is a coating of either Blue Marble, Gray Ash, or Gray Onyx, which somewhat befit its flagship-caliber feature set.