The Find X2 was one of the highest-specked smartphones from Oppo around the time of its early 2020 market entry. Its high-class specs, however, did not go through our technical pros-and-cons review unscathed.

Starting off with its drawbacks, this successor to the 2018 Find X does not support any memory expansion

, which some shoppers might find problematic, coming from a flagship wannabe. This means that users are left with only its 256GB UFS 3.0 memory to work with. Additionally, its Ceramic (Black) variant weighs in at 209 grams

, whereas some other high-caliber phablets listed here on Phonerated weigh only around 160g.

Don't Buy The Oppo Find X2 Before You Check:

, which comes in the form of a 6.7-inch OLED interface with a 3K QHD+ resolution of 3168 x 1440 pixels, a smart-TV-esque 120Hz refresh rate, and a 1200-nit local peak brightness level. It also supports HDR10+ content and it comes with AI-aided eye protection features.

Its selling points also include a flagship-worthy Snapdragon 865 eight-core 64-bit processor that peaks at 2.84GHz

, the combination of which makes it one of the fastest smartphones of its generation. Joining its hardware components is a 4200mAh battery with Oppo(')s self-branded SuperVOOC 2.0 Flash Charge technology. 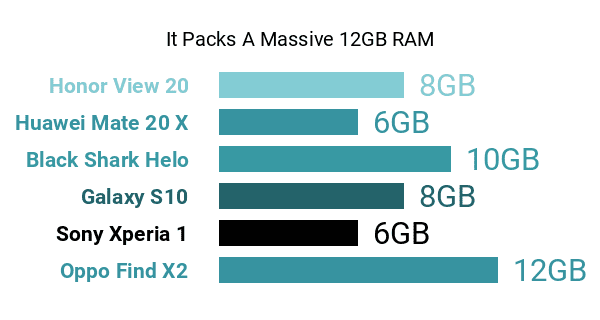 The Oppo Find X2(')s photography pros and cons seem promising versus what some imaging-first 2020 contenders offer. At the back, it touts a triple-lens camera

consisting of a 48-megapixel f/1.7-aperture primary lens, a 12-megapixel ultra-wide-angle lens with a 120-degree field-of-view, and a 13-megapixel telephoto lens that enables 5x hybrid zooming. Up front, it has a 32-megapixel 5P-lens selfie camera with native AI beautification.

Its other features include an in-screen fingerprint scanner and the ColorOS 7.1 ecosystem, which is based on Android 10. Its two main finishes are Ceramic and Glass, but an Orange (Vegan Leather) model is available as well.

All said, the Find X2 could make for a solid find for upmarket shoppers eying a wide-screen phone that(')s inclined to performance and photography.