Pretty much a beefed-up version of Oppo's Reno, the Oppo Reno 10x Zoom upgrades its sibling's dual-lens camera to a triple-lens system

, all of which make it a solid contender for a spot on Phonerated's list of the best smartphones for photography. 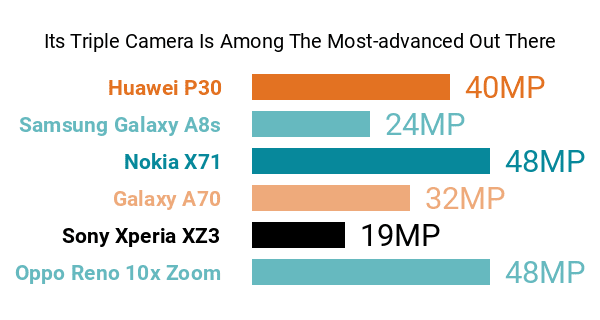 Don't Buy The Oppo Reno 10x Zoom Before You Check:

That big imaging pro aside, the Reno 10x Zoom, which is pretty weighty, at 215 grams

, still has its fair share of cons, one of which is its 256GB maximum internal memory

that shies in comparison to the 512GB native storage caps offered by a few competing flagship models. Furthermore, it does not quite strike a premium vein display-wise, seeing that its otherwise spacious 6.6-inch On-Cell AMOLED screen settles for a 2340 x 1080 FHD+ sharpness and scores a pixel density of only 387ppi

-- some of the best large-screen phones on the market as of this on-paper review bluster with 2K-1440p displays and at least 500ppi pixel densities.

That said, its display boasts a notch-free design due to its pivot-out selfie cam architecture

, which basically means that its 16-megapixel selfie cam sits on a motorized swivel-out panel that automatically fires up whenever the front cam is accessed.

Still on the positive side of its pros and cons, this Reno variant became one of the fastest phones around the time of this specs-based analysis, running on Qualcomm's Snapdragon 855 engine

, which is a three-cluster chip made up of a single 2.84GHz main cluster, a 2.42GHz triple-core cluster, and a 1.8GHz quad-core cluster. It is coupled with a flagship-caliber 8GB RAM, while a passable 4065mAh battery is on power duties.

, the ColorOS 6.0 ecosystem (based on Android 9.0 Pie), and a coating of either Jet Black or Ocean Green.

So, with its high-class pros and cons in mind, this Reno edition calls out to multimedia junkies who value photography more than anything else.