Somewhat a revamped version of the original Galaxy A20, the Samsung Galaxy A20s offers a budget-tier array of pros and cons, although it seems to have taken some inspiration from the leading imaging-first smartphones as of this review.

Starting off with its rather disgruntling specs, the A20s passes up on NFC (Near Field Communication)

, which was the staple wireless protocol for mobile transactions and peer-to-peer data transfers when it entered the market. Additionally, even though its 6.5-inch screen space

reminds us of the facades of the best wide-screen models featured here on Phonerated, it is pinned to the entry-level category by its 1560 x 720 HD+ screen definition

-- a good number of its Galaxy A cousins tout Super AMOLED screens with at least FHD-1080p resolutions. 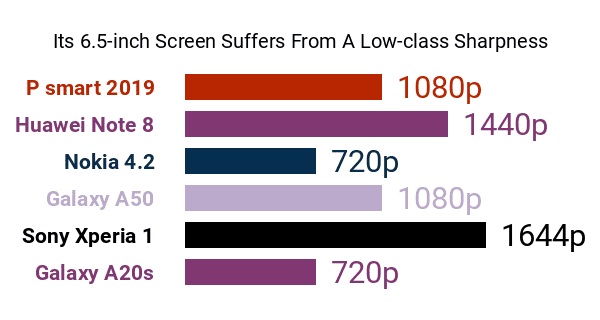 Don't Buy The Samsung Galaxy A20s Before You Check:

Despite those cons, the A20s looks to appeal to mobile photography enthusiasts with its triple camera setup

, which consists of a 13-megapixel main lens for standard photography, a 5-megapixel depth-of-field sensor, and an 8-megapixel ultra-wide sensor for landscape photography. It also has a so-so 8-megapixel camera sitting up front for selfies and facial recognition. 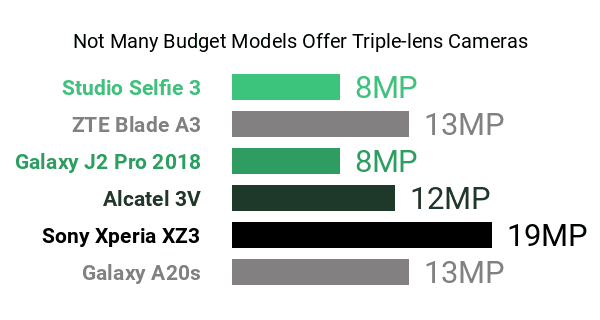 Popping its lid open, the Galaxy A20s runs on a 1.8GHz octa-core processor coupled with either 4GB or 3GB of RAM, a duo that sounds just about right for a 2019-released budget-class Android phone. As for battery, its 4000mAh cell

safely hits our 2019 sweet spot for entry- and mid-level smartphones -- if you(')re looking for more raw power though, check out this list of the best high-stamina phones on the market. 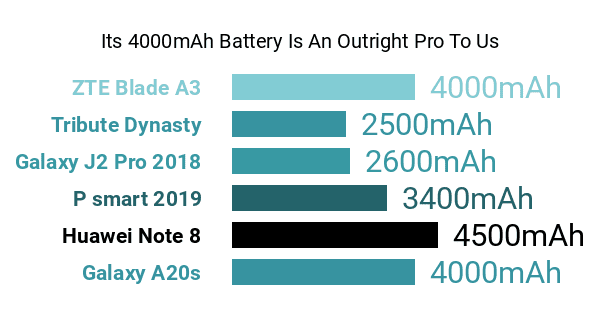 (or 32GB, depending on the variant) native memory pales in comparison to those of many higher-specked models, its 512GB external memory ceiling

sounds more than appreciable to us, considering that many other models within its price group support only up to 256GB of top-up memory. Also among its pros and cons is a rear-mounted fingerprint scanner and two nano SIM card slots.

With a 3D plastic shell topping it off, the Galaxy A20s seems like a solid choice for budget-cautious shoppers looking for a large-screen, photography-driven Android.