Released alongside the A30s, Samsung's Galaxy A50s is a high-caliber photography smartphone that could have done a bit better on the storage and the display fronts.

By this, we mean that it could have offered more than 128GB of maximum internal memory

, seeing that some of its closest 2019 competitors pack twice as much on-board storage. It does support up to 512GB's worth of extra space

, though, which was a surefire pro as we were writing this. Its cons also include the 1080p-only definition

on its large 6.4-inch screen, knowing that some of the best wide-screen smartphones featured here on Phonerated bluster with 2K-1440p displays.

Don't Buy The Samsung Galaxy A50s Before You Check:

consisting of a whopping 48-megapixel f/2.0-aperture main lens, a 5-megapixel depth sensor for things like background blurring, and an 8-megapixel ultra-wide lens for scenic or landscape shots of up to 123 degrees. 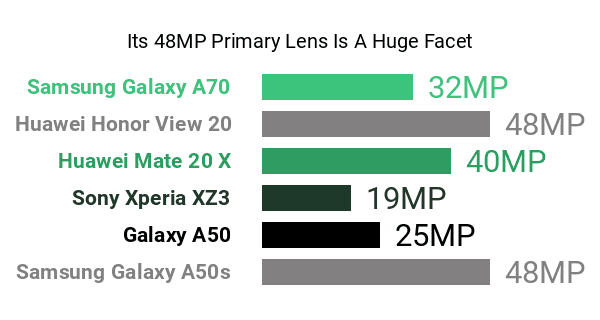 that might plug this Galaxy A model into our list of the leading selfie phones on the market. Our technical review also reveals an upscale on-screen fingerprint reader

Looking under the hood, the A50s banks on a 4000mAh battery

that could fair well versus those of many other 2019-released high-enders. It runs on a dual-cluster eight-core engine comprised of a 2.3GHz main cluster and a 1.7GHz efficiency cluster. Joining the mix is either 6GB or 4GB of RAM (depending on the variant). 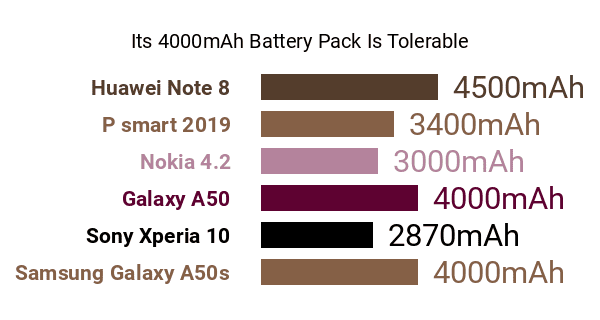 Also part of its pros and cons are a prism-like rear finish, Violet and Green being a couple of its color options, the Android 9.0 Pie ecosystem, and Samsung's signature Bixby mobile companion.

Summing up, the A50s is an upmarket smartphone that primarily caters to mobile photographers who don't mind dealing with a mid-level hardware setup.