A huge upgrade over the original A70, the Samsung Galaxy A70s potentially finds itself alongside some of the best photography smartphones found here on Phonerated, blustering with a premium-class triple camera

that(')s made up of a whopping 64-megapixel primary lens (one of the highest-resolution lenses on the market as of this pros-and-cons review) as well as as 8- and 5-megapixel deputy lenses. Its key features include Night Mode, a 2160p (4K) video-recording resolution, and Super Steady Mode.

Don't Buy The Samsung Galaxy A70s Before You Check:

Apart from touting a promising rear cam, this Galaxy A model also likely fares well versus the best selfie-driven phones in town with its 32-megapixel f/2.0-aperture front camera

whose raw pixel resolution was among the highest among selfie shooters when we were checking out its specs.

Those imaging perks aside, the Galaxy A70s still has its fair share of drawbacks. For one, it settles for a 2GHz (top speed) eight-core Snapdragon 675 processor

, whereas a lot of its closest competitors run on engines that peak at over 2.5GHz. We are also unimpressed with its 128GB native memory

, since a few tantamount models pack twice as much native storage. Adding to its hardware setup is an appreciable 8GB RAM -- Samsung also offers a 6GB-only variant. 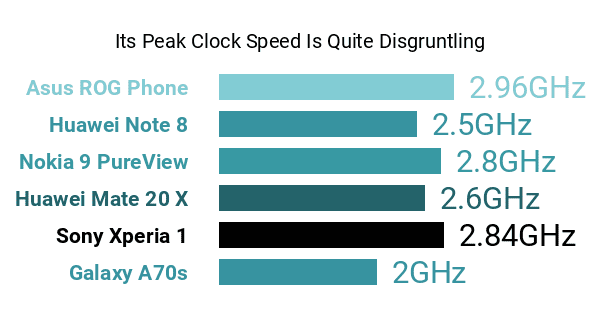 Although some models with roughly similar pros and cons boast 2K-1440p screens, the 6.7-inch A70s settles for a 1080p-only resolution only

, which is not too high-end in our book. This model also offers an on-screen fingerprint sensor, standard NFC (Near Field Communication) support, and a 4500mAh battery infused with a 25W wired fast-charging system 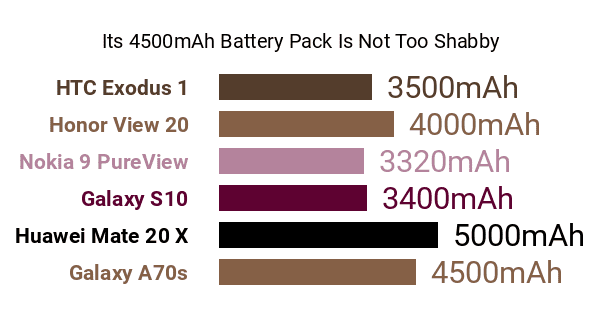 The Galaxy A70s is finished in a 3D prism design of either Prism Crush Red, Prism Crush White, or Prism Crush Black, while its technical pros and cons are joined by the Android 9.0 Pie OS overlaid with the Samsung One UI, topping it off as a feasible choice for users who are all about photography.