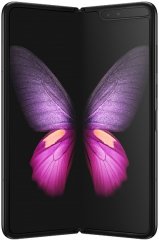 
The Samsung Galaxy Fold 5G obviously packs a huge pro over its mother model connectivity-wise, being one of the brand's earliest models to support the 5G-TDD N78 (3500) network band

, rightly placing itself alongside some of the best smartphones around as of this specs-based review. That notwithstanding, we still caught a couple of cons within its feature set.

, although its 512GB native storage cap

is by no means something to complain about. Also, it oddly reduces the original Fold model's 4380mAh battery capacity down to only 4235mAh

-- even though it's just a slight drop, tech geeks like us will take all the power we can get, taking into account its foldable form factor and demanding hardware setup. 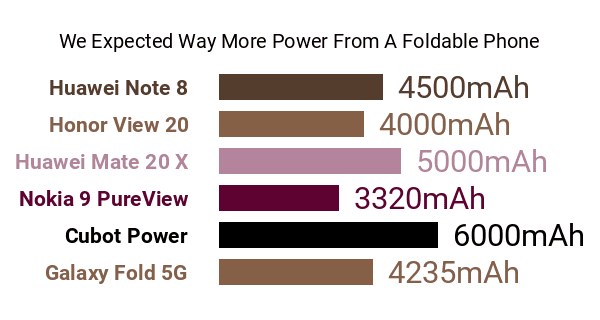 Don't Buy The Samsung Galaxy Fold 5G Before You Check:

Under the hood, it runs on a premium-class (as of this technical Phonerated write-up) triple-cluster engine

consisting of a 2.8GHz single-core main cluster, a 2.4GHz tri-core cluster, and a quad-core 1.7GHz cluster for day-to-day tasks. Its engine, which, by the way, made it one of the fastest smartphones available when it debuted, is fittingly accompanied by a massive 12GB RAM

-- one of the highest RAM counts among 2019-released Android devices. 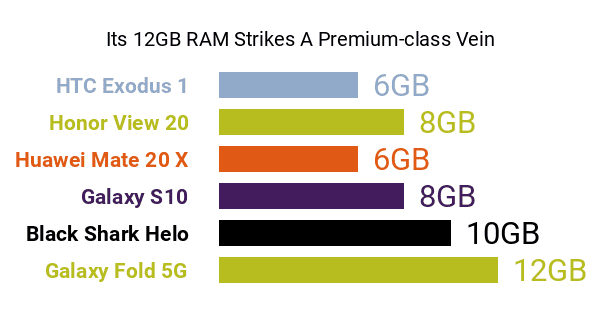 Its exterior pros and cons are headlined by two facades -- the main one being a spacious 7.3-inch Dynamic AMOLED screen with a 2152 x 1536 QXGA+ definition

, while the second one is a modest 4.6-inch Super AMOLED HD+ (720p) interface. Its expansive display challenges those of the best phablets and large-screen phones on the market.

The Galaxy Fold 5G also flexes some high-class muscles when it comes to photography, touting a total of six cameras. Its main camera setup is a rear-facing triple-lens system

leading its perks. Up front sits a 10- plus 8-megapixel dual-lens setup

for selfies, while a single 10-megapixel shooter sits atop its aforementioned 4.6-inch cover screen.

Overall, some of this foldable phone's pros and cons make it worthy of comparisons to a few premium-class models, although our analysis reveals that it's not exactly a flawless smartphone.