While it is a sizable upgrade over the original Galaxy J4, which hit the market several months earlier, the Samsung Galaxy J4 Plus sticks to an entry-level target audience, being marred by cons like a low-caliber 1.4GHz quad-core Snapdragon 425 processor

-- it came out when eight-core smartphones were all the rage. It also does not shoot for anything fancy when it comes to selfies, opting for an old-fashioned 5-megapixel fixed-focus front camera

Don't Buy The Samsung Galaxy J4 Plus Before You Check:

As for its pros, the J4+ offers a mammoth (as far as low-caliber smartphones go) 512GB external memory support

alongside either 32GB or 16GB of native storage. It also touts a decent 13-megapixel f/1.9 primary camera that carries the phone's Avatar with Emotify feature

, a preloaded app that lets users play around with avatars and stickers for online conversations.

This Galaxy J model's pros and cons also include a large 6-inch Infinity Display with an 18.5:9 aspect ratio

that calls up Phonerated's list of the best phablets and large-screen smartphones around. That being said, its facade is not that ambitious, settling for a budget-tier HD+ (1480 x 720) resolution

, instead of going for something like FHD+ (1080p). Accompanying its wide display is the Dolby Atmos audio technology

, which is a nice touch on the audio front, coming from a mass-tier 6-incher.

, which, though does not quite put it alongside the best big-battery phones, sounds passable, relative to its other pros and cons. It also comes with either 3GB or 2GB of RAM that just about lets it stand its ground versus plenty of other budget-tier Androids that came out around the time of this technical review. 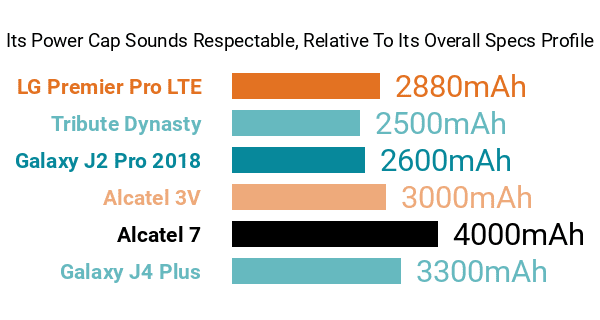 Just like its J6 Plus sibling, the Galaxy J4 Plus dons what Samsung calls a glass finish

that tries to set it apart from most of its rivals within this price group, particularly those that stick to cheap plastic exteriors. It is available in Gold, Pink, Blue, and Black, with the Android 8.1 Oreo platform tying everything together.

So, given its feature set, the Galaxy J4+ sounds like a decent choice for budget-cautious shoppers who are looking for a well-rounded large-screen Android.