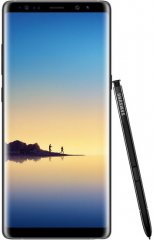 
Let's face it, a worldwide catastrophe like the Galaxy Note7, which cost the brand millions in revenue, is not something a company easily brushes off its shoulders, but that's what Samsung apparently wants to do, going bold with the massive Samsung Galaxy Note8, with the hopes of reviving its disgraced phablet line.

The first pro tech junkies like us will notice outright is its humongous 6.3-inch facade, which Samsung decked out with a WQHD+ (2960 x 1440) definition

. On top of the aforementioned screen specs, the Note8 features a remarkable 521ppi pixel density

, which is no ordinary feat for a phone of its size, in conjunction with Samsung's signature Edge Screen (customizable side panels) and Always-On Display technologies

, giving users a lot more room for productivity, versus many everyday large-screen Androids.

Don't Buy The Samsung Galaxy Note8 Before You Check:

Speaking of productivity, this Samsung flagship is the primary vessel for the Bixby voice assistant

, which we would say is Samsung's long-overdue answer to Apple's Siri and Microsoft's Cortana software. It even comes with its own dedicated Bixby button, for quick access to the Bixby-enabled productivity environment.

Going back to its mammoth size, keep in mind that you don'g get to rock a supersized screen without taking a hit in the portability department, with the Note8 weighing in at 195 grams

and measuring a total of 6.4 inches diagonally

. Good luck fitting that in your front pocket. Looking past the forenamed cons, however, it couples its premium-class display with equally-sophisticated processing components, led by an Exynos 8895 10nm octa-core processor boasting a top clock speed of 2.35GHz

. Its top-line chip is clubbed with an ultra-high-end 6GB LPDDR4 RAM

and the Vulkan API for gaming

While the Note8 is a nearly-immaculate model on the performance front, it had us scratching our heads with its 3300mAh-only power capacity

, considering that many other premium-specked Androids dare not offer anything less than 4000mAh. Sure, WPC/PMA wireless charging

is on board, but its raw battery capacity simply does not cut it for us.

Heading over to its pros and cons in the multimedia department, the Note8 is graced with a popular (around its September 2017 release) dual-rear-camera system

, comprising of a 12-megapixel telephoto camera and a 12-megapixel Dual Pixel wide-angle camera. Together they enable classy features like 4K-2160p video-recording

, slow-motion video capture of up to 240fps

, and up to 2x optical zooming

. For selfies, it touts an 8-megapixel f/1.7-aperture frontal camera with its own selective focus/autofocus capabilities

, though a front-firing LED flash was nowhere to be found

. It also sings just the right notes music-wise, with features like Dual Audio

, which lets the phone blast music off two Bluetooth devices simultaneously, hopping on board.

In anticipation of some heavy multimedia action, the Note8 rocks a 256GB maximum internal memory

(128GB and 64GB models are also offered), which a bunch of other 2017 flagships forgo, alongside a microSD card slot for 256GB more storage

. In the same reassuring fashion as its storage memory, the Note8 is fitted with an IP68-grade dust-proof and water-resistant shell

-- always a welcome facet for any model in the Android tier. 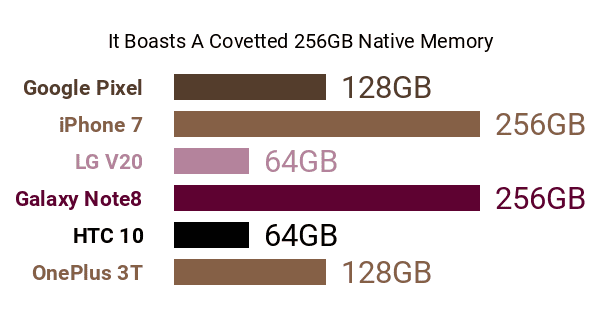 Though overshadowed by its more-prominent pros and cons, the Note8's security ensemble is just as promising to us, seeing that it combines usual stuff like PIN and password protection with not-so-typical biometric authentication modes, namely, fingerprint detection, iris scanning, and facial recognition

. The Note8 is offered in four fancy colors, including Deepsea Blue and Maple Gold.

In review, the Galaxy Note8 is a treat for users who are in search of a premium screen coupled with wide-ranging productivity features as well as top-of-the-line (at least as of 2017 Q3) performance, that is, if they are willing to forget the whole Note7 fiasco as much as Samsung obviously is.

It is described as more resistant to water, dust and shocks.

It is rigged with Miracast, a a wireless protocol that allows you to connect to TVs and share your screen

Memory can be expanded up to 256GB:

The Samsung Galaxy Note8 doesn't come with an included memory card but it supports up to 256GB of memory expansion, which will be convenient to save videos and pictures shot with the included Dual 12-megapixel camera.

*** These pros and cons are computer-generated based on our analysis formula and the specifications we have in our database for this item. If you see an error, please let us know.