Marking the 10-year anniversary of Samsung(')s flagship Galaxy S smartphone family, the Samsung Galaxy S10 challenges some of the best phablets listed here on Phonerated with its 6.1-inch Dynamic AMOLED notch-less display, which boasts a Quad HD+ definition of 3040 x 1440

, and support for high-class HDR10+ content. Since it does not have a display notch, its cam sits on the corner of its interface, while its ultrasonic fingerprint sensor is embedded into the screen

Don't Buy The Samsung Galaxy S10 Before You Check:

Having said that, our review of its pros and cons nevertheless caught a couple of hiccups lurking within its list of specs, one of which is its mere 3400mAh raw battery capacity

, which sounds so-so, at least compared to the 4500mAh-5000mAh power caps boasted by a few lower-specked competitors. Its 10-megapixel selfie camera resolution

does not sound that promising either, knowing that some of the best selfie phones of its time blustered with 25-megapixel selfie shooters. 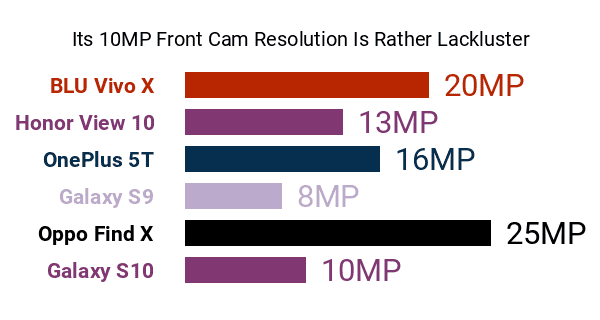 Setting those cons aside, this 2019 Galaxy S model packs some premium-class hardware pros, one of which is Qualcomm(')s Snapdragon 855 octa-core processor

, which consists of a 2.84GHz single-core performance cluster, a three-core 2.41GHz cluster, and a quad-core 1.9GHz cluster, consequently making it one of the fastest smartphones available as of this on-paper analysis. Its triple-cluster engine is accompanied by a robust 8GB RAM

and either 512GB or 128GB of native memory. A memory card slot for up to 512GB of extra storage space is on board as well.

, which is made up of a 12-megapixel main telephoto lens, a 16-megapixel ultra-wide (123 degrees) lens, and a 12-megapixel dual-aperture (f/1.5-f/2.4) wide-angle lens. Among its key imaging perks are a 4K-2160p video-recording mode at 60fps, a 960fps Super Slow-mo mode, and AI-powered optimizations. Check out some of the best photography-driven phones here.

, the Samsung Pay mobile wallet system, and a damage-resistant Corning Gorilla Glass 6 panel on its display. It is offered in colors like Flamingo Pink and Prism Blue.

All said, the Galaxy S10 makes for a solid choice for shoppers eying a performance- and photography-focused flagship contender.

It features a rarely-seen (as of its market entry) in-display ultrasonic fingerprint sensor.

The Galaxy S10 is not sold with a memory card but it supports up to 512GB in memory expansion, which is convenient to store pictures and video clips taken with the built-in 12-megapixel (telephoto cam combined with a 12-megapixel wide-angle cam and a 16-megapixel ultra-wide cam) camera.

*** These cons and pros are identified automatically based on our proprietary algorithm and the specs we found for this phone. Should you spot an error, please let us know.