Samsung's Galaxy S10 Plus was one of the brand's highest-specked smartphones around the time of this data-driven review, brushing shoulders with some popular phablets and large-screen smartphones by touting a 6.4-inch Dynamic AMOLED display sitting on a 3040 x 1440 QHD+ resolution and packing high-class perks like Always On Display (AOD) and Edge Screen.

Don't Buy The Samsung Galaxy S10+ Before You Check:

Despite its ambitious specs, which we'll scrutinize further down this Phonerated review, however, this Galaxy S edition is not without some cons. For instance, despite its 4100mAh battery power

sounding passable by early 2019 standards, we cannot help but wish that it reached for at least a 5000mAh cell, if only because it runs on some potentially power-hungry hardware pros. Also, while its on-display (Its aforementioned screen does not have a notch) dual-lens front camera setup

sounds like a solid selling point, we think it could have done better than 10- and 8-megapixel lens resolutions

, knowing that some of the best phones for selfies boast 25-megapixel (or higher) front cameras.

Going back to its hardware components, the Samsung Galaxy S10 Plus was among the first flagship phones to run on the Qualcomm Snapdragon 855 7nm octa-core chip

, a high-octane engine consisting of a single-core main cluster peaking at 2.84GHz, a triple-core cluster running at 2.41GHz, and a quad-core 1.78GHz cluster for undemanding applications. Furthermore, it was one of the earliest Androids to break the 12GB RAM threshold

(It comes with an 8GB variant as well), overtaking some of the fastest smartphones available when it comes to raw RAM count -- check out some high-caliber 8GB-RAM contenders here. 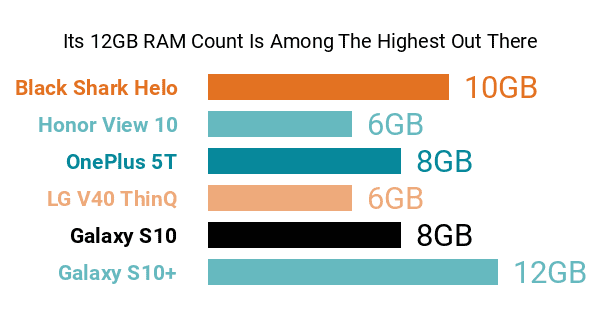 , which is only offered by the Ceramic model -- the Glass-finished edition comes with only 512GB or 128GB of native memory, but all versions support up to 512GB's worth of top-up storage.

The forenamed generous memory cap, by the way, somewhat complements the S10+'s auspicious triple-lens primary camera that's made up of a 12-megapixel telephoto main cam, a 12-megapixel wide-angle cam with a dual aperture mode (f/1.5 or f/2.4), and a 16-megapixel ultra-wide cam for scenic shots. Its in-screen ultrasonic fingerprint scanner

So, as far as technical pros and cons are concerned, the Galaxy S10+ caters to tech-savvy users eying a high-performance, multimedia-driven phablet.