One of the most-advanced photography smartphones available as of this technical Phonerated review, the Samsung Galaxy S20 Ultra blusters with a four-lens camera system headlined by a 108-megapixel wide-angle primary camera

whose raw pixel resolution was staggering, at least compared to what most other early 2020 releases offer. The rest of its photography pros and cons include a 48-megapixel zooming lens, a 12-megapixel ultra-wide lens, and a VGA DepthVision camera. It captures 8K (7680 x 4320) videos at 24fps

and it is capable of recording HD-720p slow-motion videos at up to 960fps.

Don't Buy The Samsung Galaxy S20 Ultra Before You Check:

The aforementioned pro is powered by a tri-cluster eight-core 64-bit engine peaking at 2.7GHz

, which we think is not that impressive, considering the rest of its specs, no to mention that some of the fastest smartphones of its time clock in at 2.8GHz or higher. Its 222g body weight

also seems like a slight con, if only because a few other popular high-enders hover only around the 160g mark.

Having said that, the rest of its hardware components make the S20 Ultra a surefire flagship. It touts a 16GB maximum RAM capacity

, which, as of its market entry, was the highest RAM count for a mobile phone. It also features 5G connectivity

and it lugs a robust 5000mAh battery

that(')s enabled for both wired and wireless (WPC) quick-charging. Also on board is a heart 512GB native memory (Samsung also ships 256GB and 128GB variants). 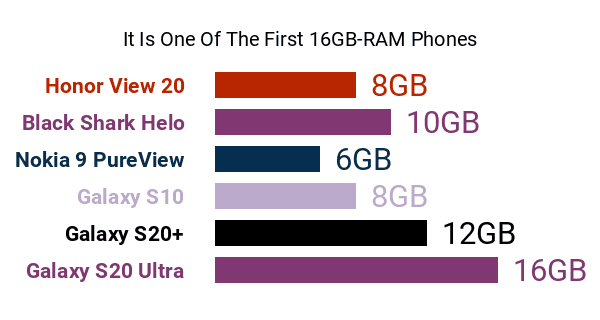 Sitting up front is a 40-megapixel punch-hole front camera

that outstrips those of some selfie-driven flagships when it comes to raw pixel resolution, although an accompanying front LED flash would have been nice

, one of Samsung(')s largest and most-ambitious smartphone displays to date. It has a Smart-TV-esque 120Hz refresh rate and it supports high-class HDR10+ content. The brand(')s signature Always On and Edge Panels features are also part of its screen(')s upmarket pros and cons.

All said, the S20 Ultra is a large-screen for for serious mobile photographers and multimedia junkies.

** This phone is also known as: Samsung S20 Ultra