One of two heavyweight Android-Oreo-sporting smartphones unmasked by Samsung during the 2018 Mobile World Congress (MWC), the Samsung Galaxy S9 is packed with some premium-caliber pros, but true-blue tech junkies like us will easily spot a few unsavory cons, including its mere 8-megapixel f/1.7 front-facing camera

that hardly matches the selfie cams boasted by the best selfie smartphones to date. It also drops the ball in terms of storage, settling for only 64GB of internal memory -- some older Samsung flagships come in 128GB and 256GB variants. It can be expanded to up to 400GB, however.

Don't Buy The Samsung Galaxy S9 Before You Check:

In addition to its unpromising selfie cam, the Galaxy S9's 3000mAh battery capacity

sounds underwhelming as well, knowing that a good number of its contemporaries (some with less-ambitious spec sheets) have power caps that peak at 4000mAh. That said, its reassuring self-attributed battery scores, such as its 80-hour music playback time (with Always On Display off) and 22-hour talk time

as well as support for WPC and PMA wireless charging

suggests that efficiency, not raw power, is what Samsung had in mind for this 2018 flagship.

As for the real difference-makers among its specs, the Galaxy S9 banks on one of Samsung's most-advanced cameras as of this data-driven review. This comes in the form of a 12-megapixel Super Speed Dual Pixel camera decked out by a Super Slow-mo video-recording function of up to a staggering (by 2018 Q1 measures) 960fps

, a Dual Aperture system that lets it automatically switch between f/1.5 and f/2.4 apertures, depending on the current lighting conditions

, and a trendy VR Emoji function

that lets users craft emojis of themselves. These, alongside imaging pros and cons like 4K-2160p video-recording at 60fps

and a high CRI LED flash, make a compelling case for the S9 to be among the best camera phones on the market -- even despite its not-so-competitive raw pixel resolution of 12 megapixels

Aside from likely joining the best photography smartphones as of its release, we also wouldn't be surprised if the S9 finds itself alongside the chart-topping phablets of its time, boasting a 5.8-inch QHD+ (2960 x 1440) curved Super AMOLED display

with an extensive 18.5:9 aspect ratio that causes its facade to be near-bezel-less

and Always On Display 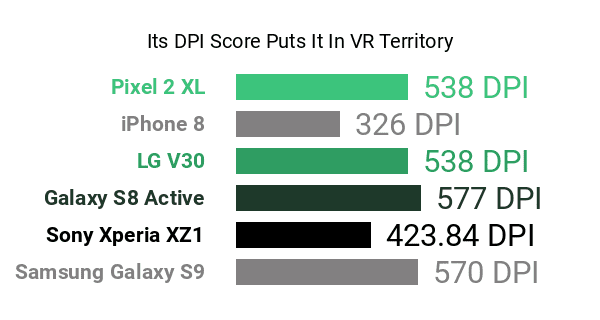 The S9 and its S9+ big brother are the first Samsung smartphones to support Samsung DeX, which essentially lets users project the phone's display onto a full-blown monitor and treat the phone as a trackpad using Samsung's DeX Pad or DeX Station docking systems.

Adding to the S9's strengths is the 10nm Qualcomm Snapdragon 845 eight-core 64-bit processor, which is composed of a four-core performance cluster clocked at a whopping 2.8GHz

and an efficiency cluster running at 1.7GHz, consequently making the S9 one of the fastest Androids as we were looking into its pros and cons -- discover its rivals in the fastest smartphones category here. Europe and a few other non-US markets ship a variant that runs on the Exynos 9810 chip, which is tantamount to the forenamed Qualcomm engine, but is crafted by Samsung in-house. Unfortunately, unlike its Plus sibling, which boasts 6GB's worth of RAM, the plain S9 settles for only 4GB

, but that does not take anything away from its premium-class engine. While we're on the topic of speed, the S9 also blusters on the connectivity front, promising a 1200Mbps maximum data rate on LTE Cat 18 networks

, upgraded with Bixy Vision (application of augmented reality to things like shopping and translation), extends a helping hand to its users. It mashes together AKG tuning and the Dolby Atmos audio technology

Long story short, although it's not an immaculate addition to Samsung's premier Galaxy S family, the Galaxy S9 hits a lot of flagship yardsticks, likely appealing to the tech-savvy smartphone buyer.

It is promoted as more resistant to water, dust and shocks.

Its processor speed of Quad 2.8GHz (+ Quad 1.7GHz) spread across 8 cores is among the fastest among recent phones.

It is a miracast smartphone:

It is equipped with Miracast, a a wireless protocol that allows you to connect to TVs and share your screen

Memory can be expanded up to 400GB:

The Galaxy S9 doesn't come with an included memory card but it has a slot for up to 400GB in memory expansion, which is convenient to store pictures and video clips shot with the included 12-megapixel (Super Speed Dual Pixel cam) camera.

** This phone is also known as: Samsung S9

*** These pros and cons are generated automatically based on our analysis formula and the specifications we have in our database for this phone. If you spot a mistake, please let us know.