Sony's highest-specked entry during the 2019 Mobile World Congress is the Xperia 1, a multimedia-driven flagship that was among the first to feature a 21:9 screen aspect ratio

, which means that it has a more elongated form factor than a lot of competing upscale wide-screen smartphones. Its HDR OLED facade measures 6.5-inch diagonally and it boasts a premium-class (at least as of this Phonerated review) 3840 x 1644 4K resolution

. Furthermore, it is furbished by a Gorilla Glass 6 panel

, the latest iteration of Corning's scratch-resistant glass as we were checking out its specs.

Don't Buy The Sony Xperia 1 Before You Check:

This high-class Xperia model is not immune from some cons, though, one of which is its relatively-modest 8-megapixel-only selfie camera

-- the XZ3, one of its direct predecessors, touts a 13-megapixel selfie shooter. We also find its 3330mAh raw battery capacity

so-so, considering that, in comparison, some of its closest rivals pack 4000mAh on that front. That said, it does combine some of Sony's signature battery features

, including Adaptive Charging and Smart Stamina. 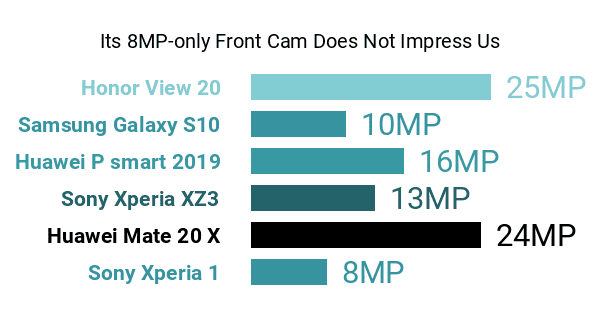 Going back to its pros, the Xperia 1 boast a triple 12-megapixel primary cam

decked out with hybrid OIS/EIS video stabilization and the Cinema Pro feature that enables users to capture videos in a 21:9 ratio. Additionally, like some of the best imaging-driven phones of its time, it offers a 960fps super slow-motion video capture mode and hardware-level bokeh shooting.

Heading over to its hardware pros and cons, this Xperia became one of the fastest smartphones when it arrived by running on Qualcomm's Snapdragon 855 triple-cluster octa-core engine whose main cluster peaks at 2.84GHz

. It is accompanied by a 6GB RAM

, which we flagged as a slight drawback, knowing that a few other models powered by a similar engine come with 8GB RAMs or higher.

Some of its other features include PS4 Remote Play coupled with Game Enhancer, the Dolby Atmos audio system, and an IP65/68-rated splash-ready shell that's offered in colors like Purple and and Gray.

With the Android 9.0 Pie ecosystem tying all its pros and cons together, the Sony Xperia 1 winds up as a viable choice for heavy multimedia junkies eying a relatively-slim large-screen smartphone.