As suggested by its name, the T-Mobile REVVLRY Plus is a version of the middle-class REVVLRY with a couple more pros to offer. That being said, it brings back a some of its little brother's cons, including its somewhat mundane 1.8GHz eight-core processor

, which obviously flounders in comparison to the engines powering the best octa-core smartphones listed here on Phonerated. Moreover, it scraps the idea of a front-firing LED flash

, which its REVVLRY sibling offers, in exchange for a smaller screen notch and an upgraded selfie cam resolution of 12 megapixels -- it has a makeshift screen flash function, though. 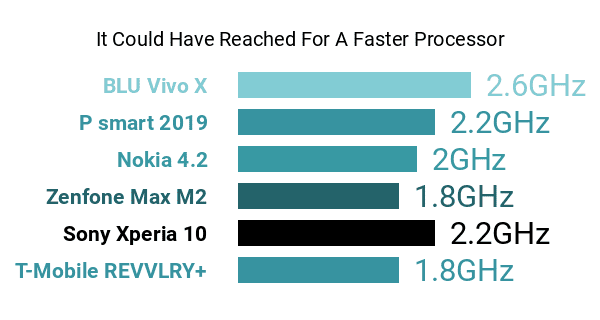 Don't Buy The T-Mobile REVVLRY+ Before You Check:

Accompanying its aforementioned processor are a 4GB RAM and a 64GB internal memory, both of which are twice what the plain REVVLRY model offers. Also, the latter is aided by a 512GB external memory allowance

, which we do not often get out of models with mid-level specs only.

The rest of its pros and cons include an enlarged 6.2-inch 19:9 display

with a 2270 x 1080 Full HD+ resolution, mimicking the facades of some leading phablets and wide-screen smartphones. Just like its base model, the REVVLRY+ is powered by a 3000mAh battery, but this time it comes with a 27W TurboPower charging system

, claiming to replenish up to 12 hours of battery life after a 15-minute charge.

, putting itself closer to the best photography smartphones available at the time of this review than its 5.7-inch sibling. Joining the mix is an IP54 rugged certification 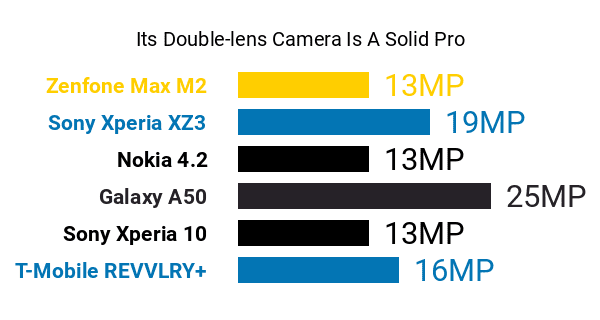 With a classic Black finish and facial recognition rounding out its pros and cons, the REVVLRY+ winds up as a feasible choice for those who prefer a large-screen Android, but aren't ready to go for a full-fledged flagship smartphone just yet.

** This phone is also known as: T-Mobile REVVLRY+