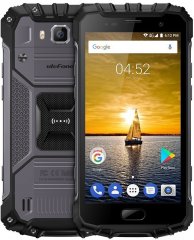 Ulefone model is a sequel to the brand's 2016 Armor that, just like its predecessor, brushes shoulders with some of the best rugged phones of its time. Nevertheless, though, our keen eye for pros and cons caught some weak spots on its hulking 14.5mm-thick armor

. Among these are its 64GB-only internal memory

, which we think could have been doubled up to 128GB, considering the hardware specs that it runs on -- we'll jump into its under-the-hood features further down this technical review. It supports up to 256GB of microSD memory, though, so its native memory cap is not too shabby at the end of the day.

also sounds rather modest compared to the QHD-1440p displays boasted by a few non-rugged phones powered by tantamount processors. That slight con aside, its Corning Gorilla Glass 3 protection

, which we think matches its IP68-certified waterproof and dust-tight housing nicely

, makes its moderately-specked screen forgivable. Its toughened exterior is complemented by some outdoorsy features like Push-to-Talk and SOS emergency services

, both of which come with their corresponding physical keys mounted on the edge of the phone.

Revving from inside the engine room is MediaTek's 2.6GHz + 1.6GHz dual-cluster octa-core chip

whose raw clock speed made the Armor 2 one of the fastest models when it charged into the rugged smartphone market. Its massive 6GB LPDDR4 RAM

is a huge pro as well, especially coming from an outdoor-ready phone like itself.

, which is a pretty huge leap from the first Armor's 3500mAh power cap. Its battery is infused with the MediaTek Pump Express Plus 2.0 fast-charging technology, with its stress test scores being headlined by a 640-hour standby time (almost 27 days) and up to 30 hours of continuous audio playback.

As for its imaging pros and cons, the Armor 2 wields a 16-megapixel two-tone-flash primary camera

that captures standard Full HD (1920 x 1080) videos at best, while a tolerable 8-megapixel front cam interpolated to 13 megapixels sits atop its screen. This model also features a fingerprint reader embedded into its home button, promising an unlocking time of only 0.1 seconds.

Running on the Android 7.0 Nougat OS out of the box, the Armor 2 calls out to adventure-seekers or field personnel who are in need of a tough high-performance smartphone.

5+ Photos Full Specs
Best Smartphones 2020 Is it your best choice?