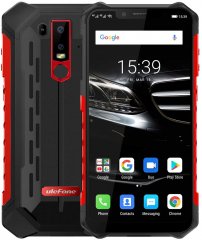 
The 2019 Ulefone Armor 6E is a watered-down version of its mother model, reducing the Armor 6's 6GB RAM down to only 4GB

and coming with only half its internal storage capacity, at 64GB

. It also has a somewhat cumbersome 267.5-gram body

, although it does line up with its base model in terms of CPU, running on a tolerable Helio P70 octa-core 2.1GHz engine -- discover the best eight-core phones here. 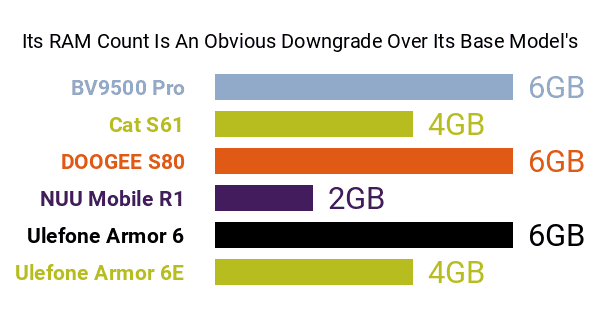 Don't Buy The Ulefone Armor 6E Before You Check:

Those cons aside, the Armor 6E banks on a rugged housing that combines the IP68, IP69K, and MIL-STD-810G rugged certifications

, which essentially make it waterproof, impervious to dust grains and other tiny particles, and resistant to accidental drops onto hard surfaces. Like a good number of other rugged contenders, its pros include a sizable battery

As for its imaging pros and cons, the 6E touts a 16- plus 2-megapixel dual camera

that we flagged as a slight drawback, considering that the original Armor 6 touts a 16- plus 8-megapixel dual cam setup whose lenses are interpolated to 21 and 13 megapixels accordingly. Also, it does not go for anything more than an 8-megapixel selfie cam, which was commonplace among gritty semi-high-end smartphones around the time of this specs-based Phonerated review.

The Armor 6E touts a wide 6.2-inch 19:9 FHD+ 2246 x 1080 display that mimics those of the leading large-screen smartphones of its time, at least when it comes to raw screen real estate. It is furbished by a Gorilla Glass 5 cover glass

, making it sound more durable versus a few other outdoorsy models.

Joining its mishmash of pros and cons is the combination of a fingerprint scanner and a Face Unlock feature for security, NFC support, and a TF card slot for up to 256GB's worth of extra storage. It dons either a Red or Black finish and it runs on Android 9.0 Pie out of the box.

** This phone is also known as: Ulefone 6E