The UMIDIGI F1 Play is a spinoff model of the original F1 that is more attuned to mobile photography and gaming, although it's not without a couple of questionable cons. Leading its weak points is its 64GB-only native storage memory

, which sounds lackluster compared to the 128GB or 256GB boasted by several competing phablets listed here on Phonerated, not to mention that it's only half of what its mother model offers (128GB).

Don't Buy The UMIDIGI F1 Play Before You Check:

(The best octa-core-powered smartphones of its generation run on at least 2.5GHz engines), despite bumping the RAM count up from 4GB to a solid 6GB 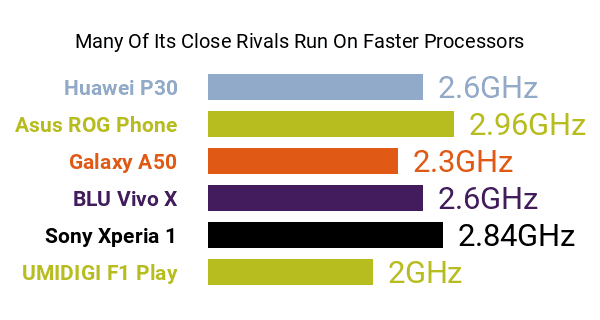 Jumping over to the highlights of its list of pros and cons, the F1 Play blusters with a highly-competitive 48- plus 8-megapixel double-lens main camera

that brings to mind our list of the best photography-driven phones on the market. It features a dual-LED flash setup and a 0.8-micron pixel size, but it oddly lacks a 4K (3840 x 2160) video-recording capability

, instead settling for a 1080p maximum video capture resolution. As of this specs-based review, 4K or Ultra HD video-recording was practically a staple facet among upmarket smartphones.

Also part of its pros is a hefty 5150mAh battery pack

aided by an 18W fast-charging technology, with support for NFC (Near Field Communication) and Dual VoLTE (voice over LTE networks) in the mix as well. 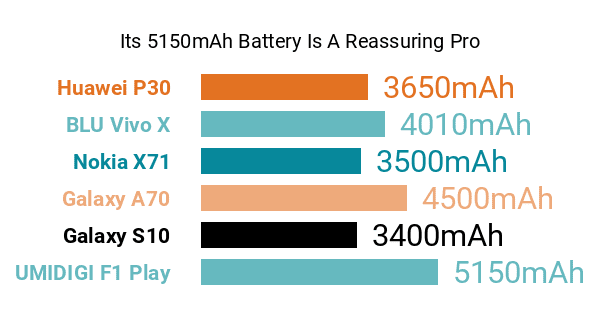 . It runs on Android 9.0 Pie out of the box and it dons either a Red or a Black finish.

All said, when it comes to pros and cons, UMIDIGI's F1 Play calls out to budding mobile photographers and those with some heavy multimedia in mind.