A step-up model to ZTE's gamer-friendly Nubia Red Magic, the ZTE Nubia Red Magic Mars was among the fastest smartphones around the time of this pros-and-cons review, running on the combination of a Qualcomm Snapdragon 845 octa-core processor clocked at 2.8GHz 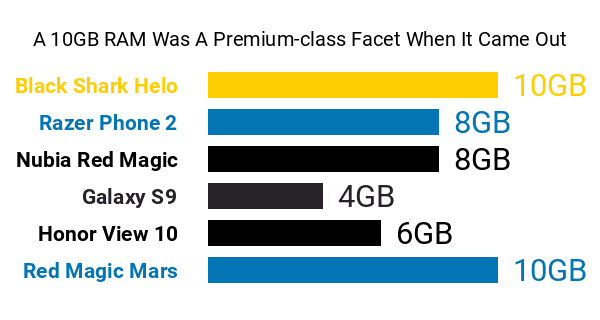 Those premium-caliber (as of this technical Phonerated write-up) specs aside, some of this upmarket gaming smartphone's features are not exactly otherworldly. For instance, it does not come with a memory card slot

for storage expansion, leaving users with only its native memory count of 256GB/128GB/64GB (depending on the variant) to work with. Also, its 3800mAh raw battery power

of its 6-inch TFT facade, if only because some of the best phablets and gaming phones around bluster with QHD/QHD+ (1440p) screens.

Its other gaming features include a programmable RGB strip

on its rear, which complements its overall finish -- Camouflage and Flame Red are a couple of its choices. The Red Magic Mars is also compatible with what ZTE calls an e-sport handle

As for its photography pros and cons, this Red Magic edition does away with a multi-lens camera setup, but still hits the 2018 upscale yardstick with its 16-megapixel AI-powered primary camera

, which is infused with the NeoVision 8.0 imaging software. Selfie-wise, its 8-megapixel f/2.0-aperture main camera

is by no means a standout, although selfies aren't really a priority among performance-driven gaming Androids.