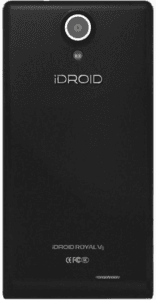 A mere pauper in the low-end Android realm, the KitKat-sporting Royal V4 from iDROID comes with a 5-inch 960 x 540 aka qHD screen, a 1.3GHz quad-core CPU with a basic 1GB RAM, and a 5-megapixel FHD-video main camera. Its specs list also include iDro Beast speakers, a low-caliber 2000mAh battery, and a 2-megapixel frontal sub-cam. This HSPA+ model comes with three free back covers (Yellow, Blue, and Pink respectively) as well as a free screen protector.